Boldly going where no tram tour has gone before!

The number of private hires involving members of the Blackpool heritage tram fleet seems to have escalated during 2014, with the use of various trams in connection with birthday celebrations becoming particularly popular. One such hire took place on Saturday 6th December, when British Trams Online‘s very own Andrew Waddington took two trams – Coronation 304 and Frigate 736 – for a tour which turned out to be even more eventful than anyone could have planned!

The day’s events began with Coronation 304 being stabled alongside the Fitting Shop, allowing the invited guests to enjoy novelty of a ride on the short length of track curving from Blundell Street onto Hopton Road. After reversing at Foxhall, the tram then headed to Starr Gate where passengers alighted for a rare photo opportunity, with the chance to capture some unusual views of a Coronation car in front of the imposing Starr Gate depot being especially welcome. As 304‘s only previous visit to the southern terminus since its re-activation earlier this year occured in torrential rain for another private hire, this was a definite scoop and set the tone for the rest of the day. The car then headed to North Pier, where after another photo stop and the cutting of the all-important birthday cake, the tram continued north to Fleetwood. After being posed both on the loop and alongside the lighthouse, it was time to return south. It had been planned to include a second visit to Starr Gate with this tram but this plan had in the meantime been dropped after slipping slightly behind schedule – however, fate was set to intervene as on arrival at Manchester Square, the traffic signals controlling access to the depot failed.  With a service tram stuck behind the sensible decision was taken that 304 would continue south to Starr Gate, where having unloaded, it made its way around the loop before being shunted into the depot itself. Not only was this previously uncharted territory for the tram, but the first time that a Coronation had ever ventured into the new depot and those who lingered to photograph this magic moment were certainly very pleased to have witnessed a little piece of tramway history.

After the tram crew had made their way back to Rigby Road, it was time to resume the tour with the illuminated Frigate 736 which was actually brought out of the depot early so that guests could enjoy the warmth of its heated saloon, which was a much appreciated gesture. After a minor problem with its doors was quickly rectified, the Frigate set sail and headed straight for Fleetwood, with many admiring glances being given to this tram in a location it has only visited once before in the light rail era. As this had been for the 2013 Christmas lights switch-on, no enthusiasts had ridden on 736 to Fleetwood for over five years and again this meant that many photographs were taken on its arrival at the Ferry. The addition of glowing birthday banners in the windows, which looked particularly effective at Fleetwood as darkness fell, also added to the novelty of the occasion. The return run to Rigby Road passed by all too quickly, and unlike 304 the tram was able to return to the same depot as it had left! It was particularly good to have a fast run with a tram which rarely gets a chance to stretch its legs due to the nature of the illumination tours which provide the vast majority of its workload.

Thanks should be made to everyone who came along to share this special time with me, and of course to all of the staff at Blackpool Transport who made such great efforts to help me celebrate a milestone birthday in fantastic style, pulling out all the stops to cater for my slightly demanding requests and give everyone present a day to remember. I honestly cannot recommend hiring a tram enough to anyone who is thinking of doing it – if you can afford it, it is definitely a great way to celebrate any occasion! 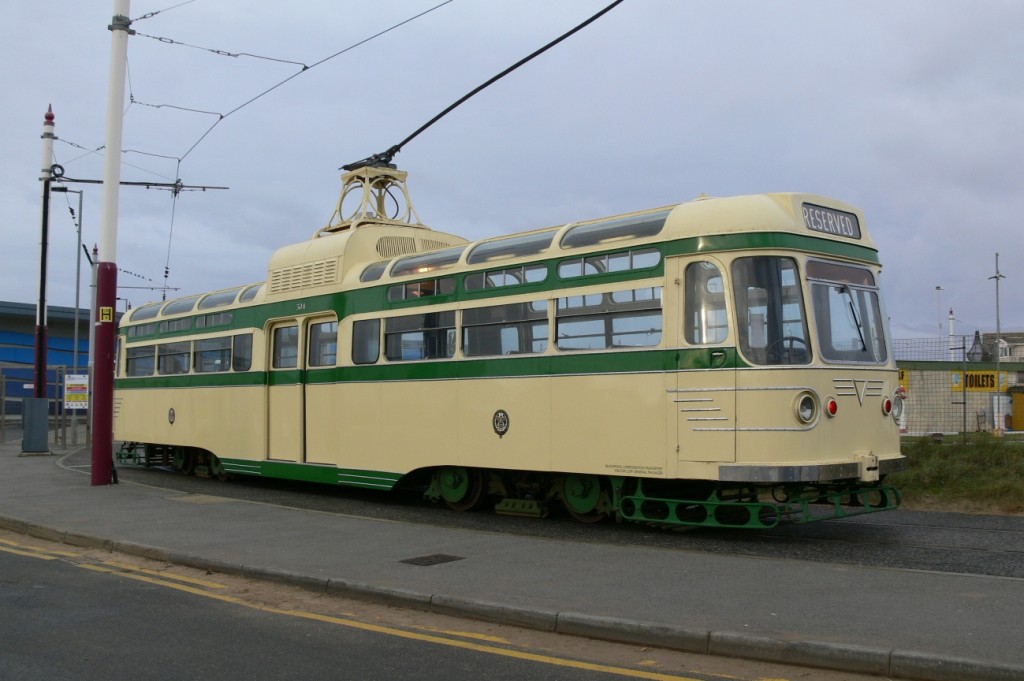 Coronation 304 makes its way around the 'new' Starr Gate loop en route to the new depot for the first time ever, having completed the first part of its private charter on 6th December. 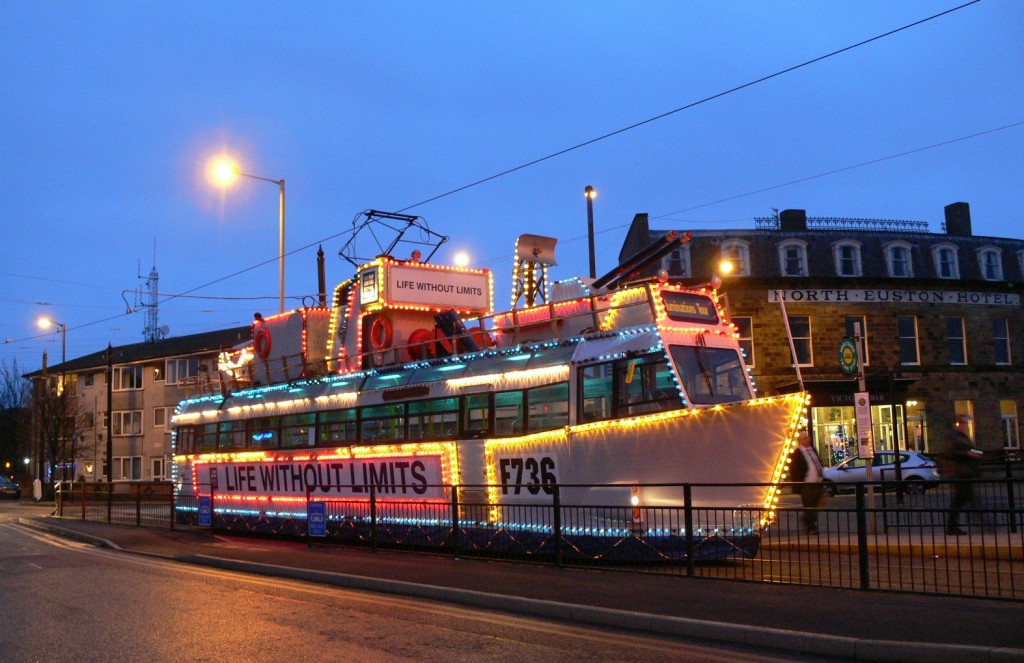 A Frigate in Fleetwood as 736 waits in the shadow of the North Euston hotel behind a service tram during the final part of a memorable excursion. (Photos x 2 by Andrew Waddington)

6 Responses to Boldly going where no tram tour has gone before!