What could potentially be one of the most exciting projects involving a recently preserved Blackpool tram has been announced, as part of a collaboration between the Manchester Transport Museum Society and the North Eastern Electrical Traction Trust. It has been confirmed that plans are afoot for Blackpool Balloon 708 to transfer to the North East, where it will hopefully be the subject of a complete restoration to its original open-top condition!

708‘s life has been a turbulent one since it last ran in passenger service in 2004. Originally sold to the Lancastrian Transport Trust, ownership of the tram later transferred to the MTMS as the LTT requested a swap with sister car 704 due to one of their members pledging financial support towards restoring this particular tram if it could stay in Blackpool. After a brief stay in Bolton, the tram moved to outside storage in Bury where it has joined sister car 702 and works car 752. There was no set plan for 708‘s long-term future and one suggestion was that it could be used as a source of spare parts for other Blackpool trams at Heaton Park, which was not popular with many enthusiasts! Another option was to restore the car as an open-topper, which would undoubtedly be a huge attraction, but with several other trams of local significance awaiting restoration, such a large investment in another Blackpool tram was going to be hard to justify.

Enter the North Eastern Electrical Traction Trust, who are currently formulating plans to develop their own heritage tramway and recently launched an appeal to build a depot in which up to 12 trams could be housed. The group have already acquired some other surplus Blackpool cars, but have now announced that 708 will hopefully become their first major restoration project once their own premises are complete. Grant funding will be needed, but the aim is to restore 708 back to its original identity as open-top streamliner 245. The tram would differ from the other open-top Balloon, ‘Princess Alice’ 706 which was not an authentic restoration – so hopefully 708 can regain features such as twin destination indicators and the correct style of roof gantry. This would create a stunning vehicle which would be totally unique in preservation, justifying its survival and helping to recreate a lost piece of Blackpool’s tramway heritage.

Subject to final agreement being reached, 708 would remain the property of the MTMS and it would be placed on long-term loan to NEETT, raising the possibility that it could eventually run at Heaton Park once restoration work is completed. Even better news is that NEETT have provisionally agreed to allowing one of their own fleet, Blackpool Balloon 721, to move to Heaton Park on loan once the tramway’s new depot is constructed, although first it will need some repairs to minor damage sustained in transit, and a repaint in a traditional green and cream livery to replace the Pleasure Beach advert currently worn.

Both organisations must be congratulated for working together to give not one, but two popular Blackpool trams a positive future and hopefully their ambitious plans will become a reality before too long. 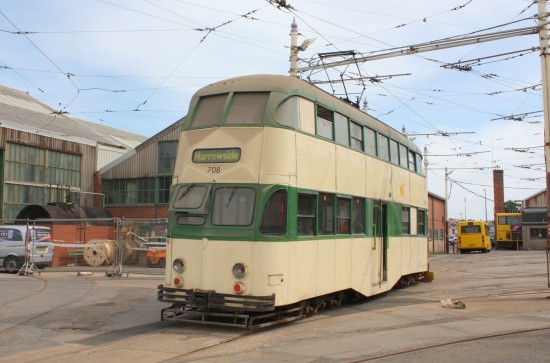 Balloon 708's last high-profile outing before it left Blackpool took place on 25th May 2011, when it was posed for a special photo shoot at Rigby Road. Here the tram is seen on that important day, looking a little neglected but largely intact. (Photo by Andrew Blood)