It is pleasing to report that the sole wheelchair-accessible tram at Crich, Berlin 223 006-4, has finally returned to use following a prolonged overhaul and repaint. The car last ran in passenger service in September 2011 and since then its appearance has been radically altered thanks to a complete external repaint in its original cream livery with grey roof and black lining-out.

The Berlin car was supposed to have been made available several weeks ago, but initial testing of the tram revealed a problem with vibration on the north end wheelset assembly, thought to have been casued by a brake drum being out of balance. This issue had actually been identified earlier but during the overhaul process no issues were discovered, typically until everything had been reassembled and the tram commissioned! The workshop team were left with little choice but to lift the car again and the usual contractors were enlisted to carry out the required work to rectify the situation as a top priority.

Following reassembly, 223 006-4 was commissioned once again and after a succesful main line test run on Saturday 12th May, it was declared fit for public service and it returned to traffic the following day. Its return is certainly welcomed as visitors unable to ride on any other tram at the Museum had been granted entry to the site for a reduced admission fee whilst it was unavailable, so this particular tram has had a direct impact on revenue taken through the gates. Although the most important thing is that less able visitors can now experience a tram ride at Crich again, 223 006-4 has attracted considerable praise thanks to its new look and although never especially popular with enthusiasts, it now looks much more stylish than it did before in its vivid orange livery. 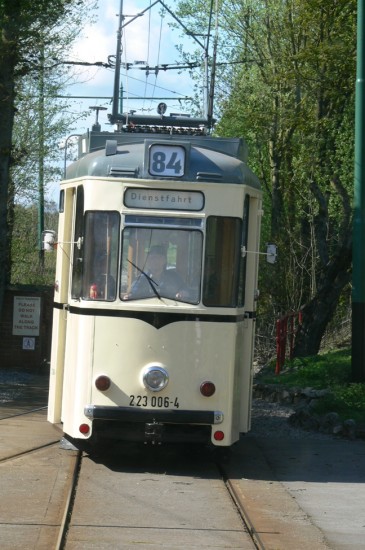 Berlin 223 006-4 entering Wakebridge passing loop on 12th May whilst on test before re-entering passenger service the next day. (Photo by Tony Waddington)