The second cavalcade of the weekend was intended to illustrate the development of electric tramcar design; rather than the vehicles being presented in order of age, the idea here was to show the design evolution, hence some trams which were of a rather antiquated design by the time they entered service (Glasgow 1068 for example), and others which were extensively modernised during their lifespan (such as Leeds 345 and Blackpool 630) may have appeared in a different position to what some may have expected.

Again the cavalcade formed near the car park and ran down the street in stately fashion. Although there were some delays in getting started this was not as bad as the Saturday and it was also pleasing to see that the first few trams were soon reversed at Town End and pressed back into service, meaning that there was noticeably much less disruption to the tram service second time around. The full order of trams in Sunday’s procession was as follows: Blackpool & Fleetwood 2, Blackpool & Fleetwood 40, LUT 159, Newcastle 114, Southampton 45, Glasgow 1068, Blackpool 166, Sheffield 74, Chesterfield 7, Glasgow 22, Blackpool 40, Blackpool 167 (appearing in a different position to that billed for unknown reasons), Leeds 399, Leeds 345, Oporto 273, MET 331, Leeds 180, London 1622, Blackpool 236, Sheffield 510, Berlin 223 006-4, Blackpool 762, Glasgow 812 (out of sequence due to an earlier failure!), Blackpool 630, Blackpool 711 and finally the works cars, Cardiff 131 and Sheffield 330. Admittedly the order of trams was very much open to debate but a good effort was made at placing them all in a logical order and clearly a great deal of thought went into not only the most appropriate order for the trams to be in, but also how to get everything in the right place at the right time. Anyone who is willing to plan the arrangement of 27 tramcars in a specific order using a one-mile line consisting largely of single track has my utmost respect!

As with Saturday, the cavalcade was then dissolved with some cars running empty back to the depot and others remaining in service. Of the morning service trams, 7, 45, 180, 273 and the defective 812 all ran in with cars 74, 159, 166, 331 and 399 taking their place for the latter part of the day. It had been planned that Glasgow 1068 would have run in but it remained in service due to the unexpected loss of 812 ensuring that Scotland would still be represented in the afternoon’s output, whilst the Access Tram also operated some additional journeys as required. Finally, the two works cars which had been added to the procession both managed a trip to Glory Mine before retiring, and even more unusually the Blackpool loco came out very late on in the day and did a few journeys between Town End and Wakebridge in passenger service! This meant that an incredible grand total of 28 different electric trams had operated in a single day; a phenomenal achievement by any stretch of the imagination.

All too soon the weekend’s excitement was almost over with trams heading back to the depot to recover from two very hectic days, but there was one final surprise in store. Shortly before the weekend it had been announced that Sunday 14th September would be Southampton 45‘s last day in service for the forseeable future as it is in need of workshop attention, and it had been assumed that the curtain had been drawn on its operating career, for now at least, when it had returned to the depot without fanfare after taking part in the Sunday cavalcade. However, as one final treat for those who stayed until the bitter end, 45 was brought back out to perform the final passenger journey of the weekend – and to make the occasion even more special, it was the rear car in a convoy of the four open-top double deckers in service, with 114, 159 and 1068 also joining in. This was a great way to conclude an unforgettable weekend and showed that, even with an advertised schedule of events, there was still room for one or two very nice surprises!

‘Electric 50′ could so easily have buckled under the pressure of the immense hype that preceded it, but this happily was not the case and the event proved beyond all doubt that the National Tramway Museum is capable of putting on tram events like nowhere else. Yes, there were some niggles and the weekend did have its faults, but when staging such an ambitious event that was inevitable. Certainly it would seem better to go for gold and aim high, accepting that there may be some issues along the way, than to dismiss such big events as being too difficult to organise, and it is events like this that will ensure that the museum remains at the front of enthusiasts’ minds. The tram service actually operated extremely smoothly for most of the time considering the huge number of cars out at once, with minimal waiting times at end termini and single line staff posts. With seemingly endless opportunities for unusual photographs as well as the chance to ride on an amazing selection of trams, ‘Electric 50’ was pretty much everything that a tram enthusiast could have wanted, and I thank every single person who was involved in putting on such a fantastic show. Particular thanks however must be made to the people who made the visit of Newcastle 114 possible as this truly was the icing on the cake of a wonderful weekend! 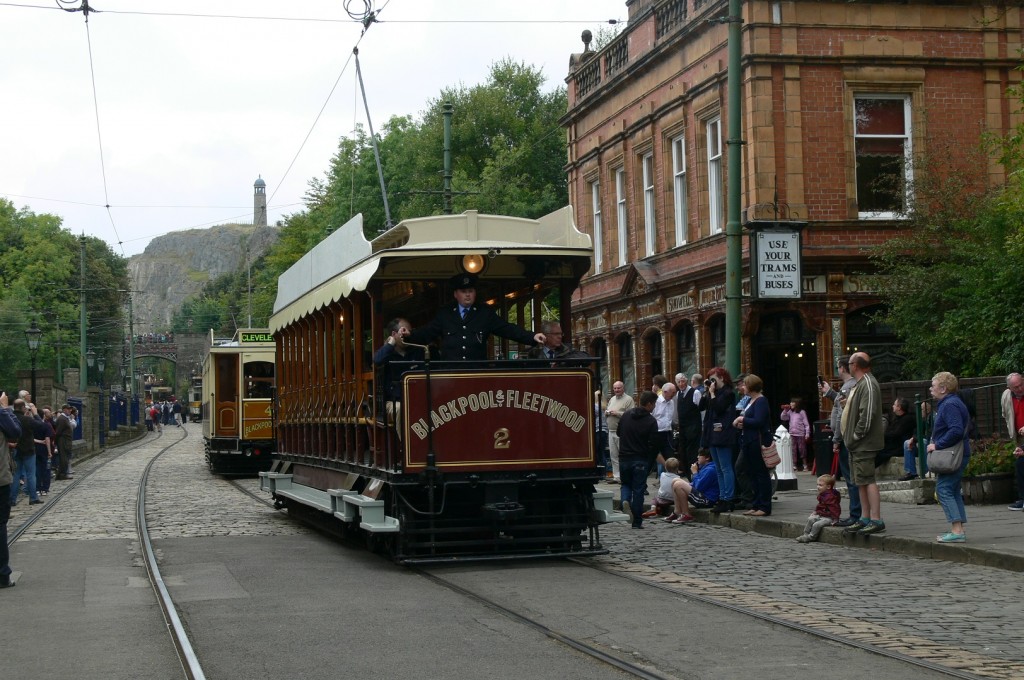 The Sunday cavalcade is welcomed by crowds of delighted visitors as Rack 2 leads 26 other trams past the Red Lion at the climax of the 'Electric 50' event. 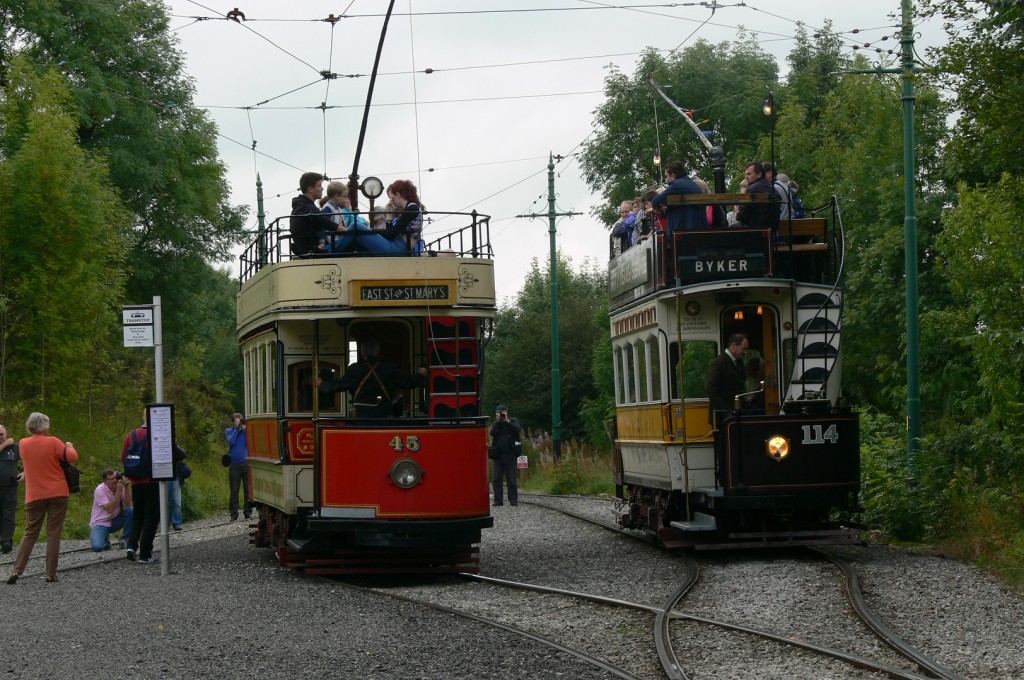 Thank you and goodnight from Southampton 45 on its last day in service for a while, as it passes fellow open topper Newcastle 114 at Glory Mine. (Photos by Andrew Waddington)