Arguably the main event to celebrate fifty years of electric tramcar operation at Crich, was the 25-tram cavalcade on Saturday 13th September, featuring all of the available electric passenger cars in the fleet, including the visiting trams currently on site, in the order that they entered passenger service at Crich. With a scheduled start time of 1400, the early part of the afternoon was largely focused on preparing for this mammoth procession with most of the morning service cars being run in and those trams which had not yet appeared on the main line being shunted around to ensure that they would leave the depot yard in the correct order.

Despite all of this meticulous planning, one or two issues during the process of setting up the cavalcade meant that it commenced about an hour later than advertised, and this unfortunately resulted in quite a lot of grumbling from the people who had camped out early, ready to witness the spectacle. Whilst for the many photographers present, the sight of the twenty-five trams together was absolutely brilliant, members of the public who were perhaps less interested or who didn’t appreciate the significance of the event, were observed to express their frustration at having to wait so long for a tram ride due to the excessive amount of time taken to form the cavalcade.

Finally, shortly after 1500, with all 25 trams ready to go, the first in line set off from the car park tram stop and progressed down the period street at a sedate pace (the Inspector positioned there certainly made sure of that!), with a commentary giving some background information on each tram as it passed underneath the Bowes Lyon Bridge. Running in the order they debuted in museum service, the order of the procession was as follows: Blackpool & Fleetwood 2, Blackpool & Fleetwood 40, Southampton 45, Blackpool 40, Glasgow 22, Sheffield 510, Glasgow 812, Leeds 180, Blackpool 166, Glasgow 1068, Blackpool 167, Blackpool 236, MET 331, Leeds 399, Sheffield 74, Chesterfield 7, London Transport 1622, Berlin 223 006-4, Oporto 273, Leeds 345, Blackpool 630, LUT 159, Blackpool 711, Newcastle 114 and Blackpool 762. Although there were a couple of minor inaccuracies in the order of trams, the sight of trams stretching back as far as the eye could see was truly incredible to witness and likewise, the efforts to arrange so many vehicles into an order of any sort deserves considerable acclaim. Likewise, it was pleasing that efforts were made to ensure that 762 could participate in the procession despite its earlier misbehaviour, when it would have been so much easier to simply exclude it from the main event.

Whilst having the 25 trams all in a long line which stretched from Stephenson Place right back to the bandstand looked amazing, it did mean that it was quite some time before the passenger service was able to resume. Some rather frantic moves were then made to accomodate the rear of the cavalcade in the street, with the first few trams being hurriedly reversed at Town End and then sent back up the line, finally restoring a tram service and some level of normality. However, it would be quite some time before the massive queue of tramcars was finally dissolved, and even then with a 15 car service resuming for the remainder of the day, there were still plenty of chances to photograph long lines of trams in the street.

In order to provide extra variety and interest, five of the trams which had run during the early part of the day – cars 40, 159, 166, 812 and 223 006-4 – all returned to the depot after taking part in the cavalcade. In their place, cars 236, 331, 630, 1068 and 1622 were all pressed into service and stayed out until late afternoon, whereas 7, 74, 180, 345 and 399 ran straight back in having not actually done any service runs on the Saturday. As some of these trams were returned to the depot for a well-earned rest, attention was also turned to Newcastle 102 which was returned to the Exhibition Hall having stood on the traverser for most of the day. However, there was a further surprise in store: after spending the day hidden away inside the workshop, works cars Cardiff 131 and Sheffield 330 made a surprise appearance, and both operated a single journey to Glory Mine and back before they also retired for the day.

As the action began to wind down and the crowds which had characterised the day dispersed, it was left to the two Blackpool & Fleetwood Tramroad cars 2 and 40 to perform the last service journey of the day. However, the excitement did not quite end there as, having traced the cause of its earlier breakdown, engineering staff decided to take Blackpool 762 out for a test run behind the last service car of the day, with a few guinea pigs on board. On this occasion, and without the pressure of a large crowd or a full complement of passengers on board, the tram behaved impeccably, setting the scene for its first full day of museum service which would occur the following day.

Other than the inevitable delays caused by the afternoon cavalcade and excessive queuing at various locations on site – most notably the ice cream parlour – the first day of ‘Electric 50’ had been truly fantastic, and was also one of the busiest days at the museum I have personally witnessed for many years. Although putting on such a large event with plenty to interest all visitors, be they enthusiasts or not, is not an easy task, it seemed to be achieved on the whole with great success and plenty of highlights – but with even more excitement to follow the very next day!

The next installment of our extended report on the ‘Electric 50’ event will focus on Sunday 14th September, with a North East themed line-up, more different trams running and much more. 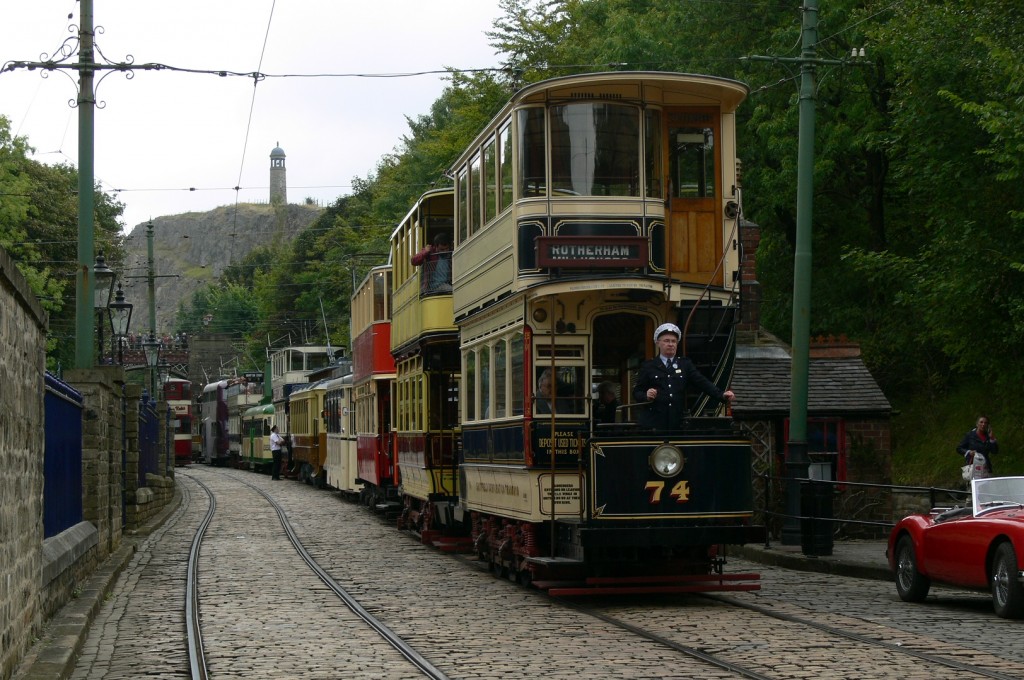 Part of the Saturday cavalcade is seen in the street with Sheffield 74 heading a line of trams which entered service at the museum within the last twenty years. 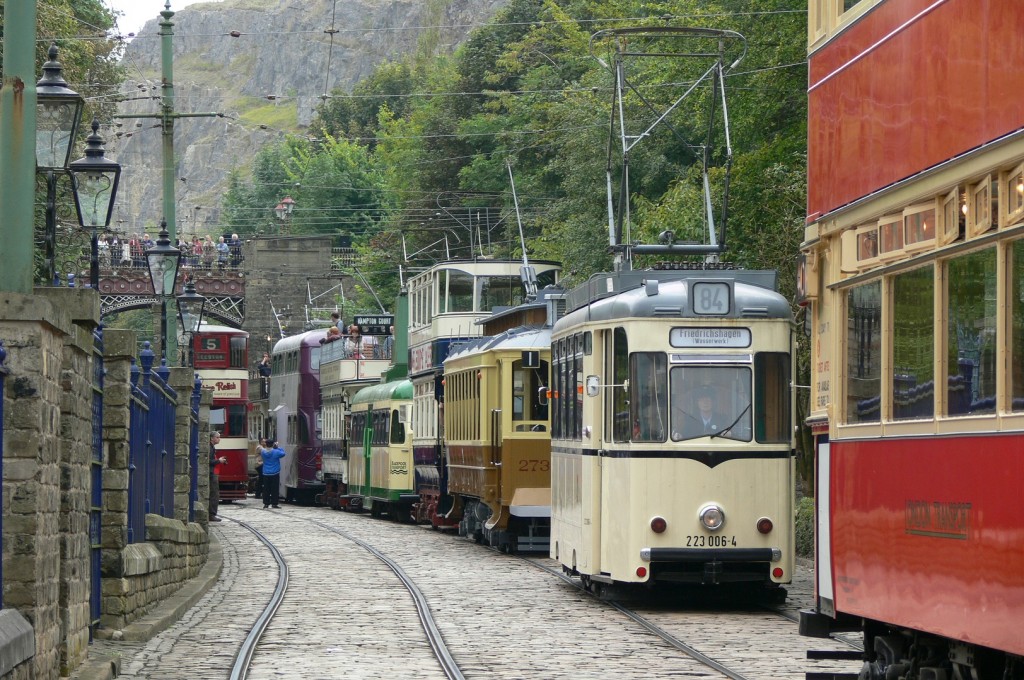 Another huge line of trams as the cavalcade makes its stately way along the street, with the Access Tram in the foreground and Leeds 180 seen returning to the depot in the distance, (Photos by Andrew Waddington)