Unless you have been living under a rock for the last few months, readers of this website will surely be aware that 2014 marks the 50th anniversary of electric tramcar operation at Crich Tramway Village – the first museum tramway in the UK to reach this remarkable milestone. To celebrate this momentous achievement, a spectacular two-day event was staged on Saturday 13th & Sunday 14th September, attracting tram enthusiasts from far and wide to enjoy this incredible event. Both members of the British Trams Online team were present for the full weekend, and we now provide the first instalment of a detailed report documenting all that happened over this remarkable two days.

After many months of preparation and anticipation, the ‘Electric 50’ at Crich event finally arrived on Saturday 13th September. Even before the tram service commenced, there was plenty of excitement and the decision to open to visitors at the slightly earlier than usual time of 0945 was rewarded with a huge queue of visitors eager to sample the best that the National Tramway Museum had to open. Early arrivals were greeted by the splendid sight of the only two surviving tramcars from the fleet of the Blackpool & Fleetwood Electric Tramroad Company – ‘Rack’ 2 of 1898 and ‘Box’ 40 of 1914 – posed side by side near the depot gates. Although this pair have been reunited at Blackpool in modern times, 2014 represents the first time since 1965 that they have both operated together at Crich, making this a very appropriate start to the weekend’s events. The positioning of this particular photo opportunity was particularly inspired, as it was just about possible to fit the Blackpool & Fleetwood Tramroad plaque set into the wall near the depot gates into shots of the two trams, making an already amazing sight even more special.

Meanwhile, in the depot yard a second photo opportunity had already been set up with even more historical significance. The short-term loan of Newcastle 114 to the museum for the ‘Electric 50’ event enabled this tram to be posed alongside Newcastle 102, with the two brown and yellow trams presenting a stunning sight. This represented the first time that two Newcastle trams had been seen together since the city’s tram system was abandoned – a major preservation first and another early highlight of the event. Whilst the Newcastle and Fleetwood cars were being mobbed by photographers, there was also plenty to see on the main line with several of the morning service cars already out and being shuffled around. This was to ensure that the service could start with the six operational cars which ran in 1964, the first year of electric operation at Crich, and considerable efforts were made to get these trams into position with some of the other cars out being sent up the line as far as Glory Mine to get them out of the way.

As the tram which inaugurated the passenger service with electric trams back in 1964, it was very fitting that the first tram to depart from Town End in service during the weekend was Blackpool & Fleetwood 2. Closely pursued by former stablemate Box 40, there was another chance to photograph this duo side by side at Glory Mine, a location which was almost permanently occupied by swarms of photographers for the duration of the day. I decided to start my weekend in appropriate fashion with a full return trip on car 2 which performed as admirably as ever. On the return leg, we passed four other stalwarts of the Crich tramway from 1964: Blackpool 40, Southampton 45, Glasgow 22 and Sheffield 510. These were quickly joined by Glasgow 812, Blackpool 166, Blackpool 167, Oporto 273, Blackpool 711, London United Tramways 159, Berlin 223 006-4 and the star of the show, Newcastle 114 which left Newcastle 102 all alone on the traverser. However, 102 was soon joined by a large crowd in the depot yard as many visitors congregated around the front of the workshop ready to witness the emergence of the latest addition to the museum’s running fleet, which would take the number of trams on the main line up to a grand total of fifteen for the beginning of the day. 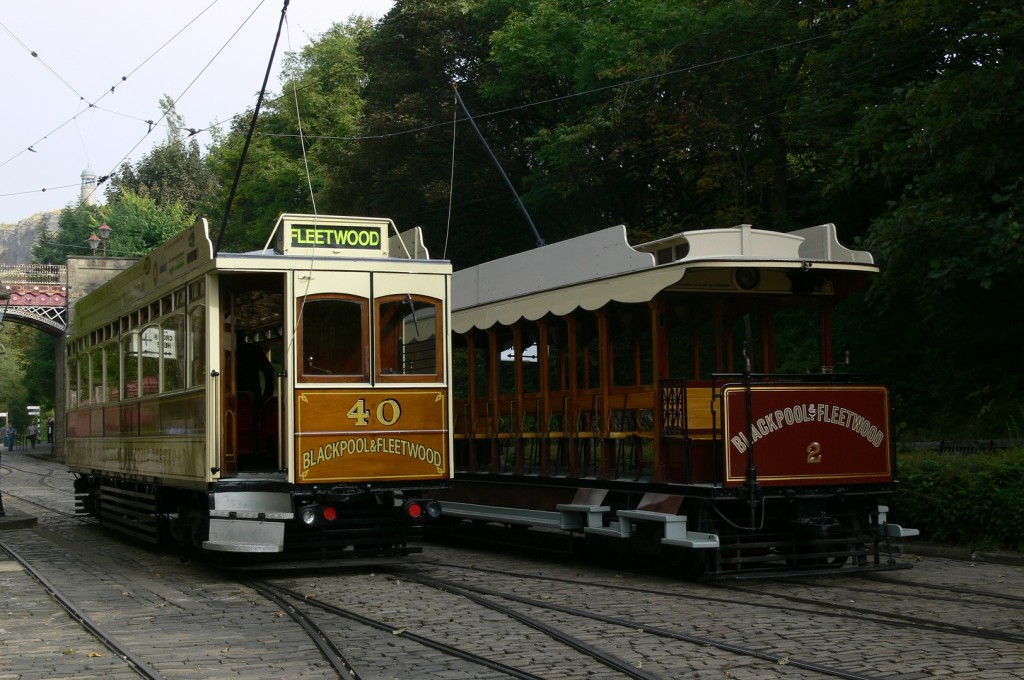 A reunion of the two survivors of the Blackpool & Fleetwood Tramroad fleet, with Box 40 and Rack 2 posing for the cameras on the Saturday morning at the start of the 'Electric 50' weekend. 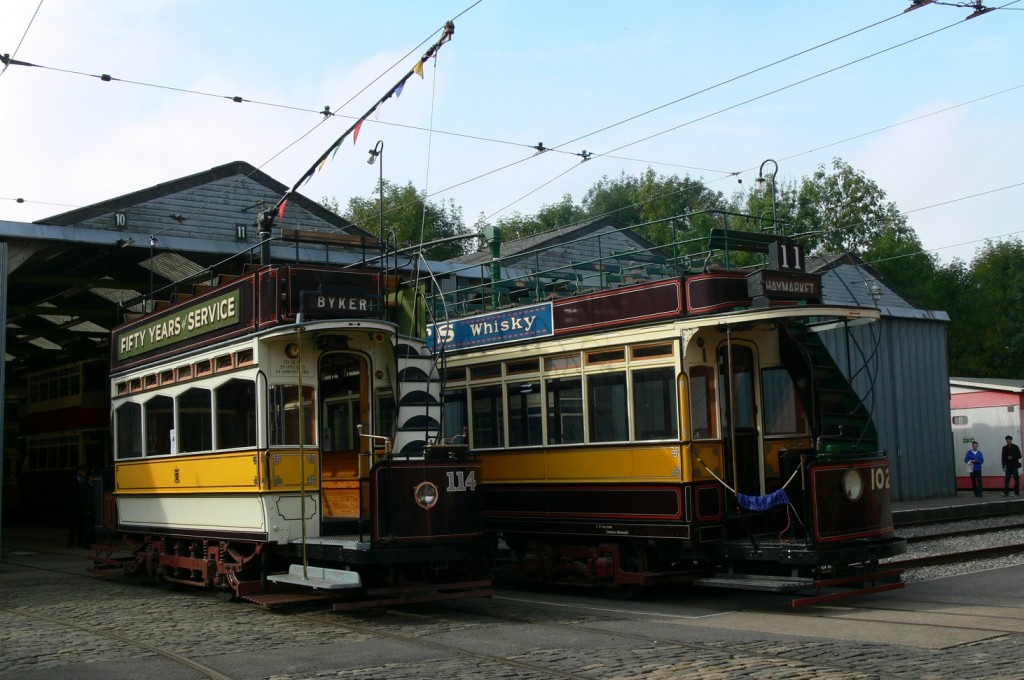 An early highlight from the weekend was the appearance of Newcastle cars 102 & 114 side by side in the depot yard, showing the subtle differences in livery between the two. (Photos by Andrew Waddington)