Manchester 173 – Your Country Needs You!

Manchester 173 – owned by the Manchester Transport Museum Society and a recent arrival at the Heaton Park Tramway – is to visit Morley, Leeds on Saturday 2nd August where it will be decorated as a recruiting tram to form the centrepiece of a Weekend of Remembrance to commemorate the outbreak of the First World War.

The Morley Chamber of Trade wished to recreate a recruiting tram that ran in Leeds during the early part of the war as part of the weekend’s commemorations and after negotiations facilitated by the Leeds Transport Historical Society (LTHS) the Manchester Transport Museum Society agreed to allow 173 to make the trip by low loader for one day only. Manchester 173 will be decorated in patriotic colours and recruiting posters as per the original recruiting tram which was seen around the Leeds tramway society throughout the First World War.

173 will be decorated before departing Manchester and will remain on the low loader during its visit to Morley with the display being open to the public between 1000 and 1600. The tram will be displayed in Windsor Court next to Morley Town Hall and the LTHS will also be having a sales stall alongside 173 with items from the Heaton Park Tramway also be on sale.

173 will be the first tram to visit Morley since the last Leeds tram ran back from Morley to Leeds on 23rd January 1935 after the closure of the tram system, The Morley tramways system was owned by Morley Corporation but operated by Leeds City Tramways with a depot in Worrall Street and termini on the A650 at Tingley Mill and Bruntcliffe Crossroads. The last passenger car on 22nd January 1935 was open balcony car 358 which ran to Fountain Street at 2318, the final cars then returned to Worrall Street depot that night before heading back to Swinegate the following day. The depot actually survived until 2012 when it was demolished and has now been replaced by housing.

Once 173 has played its starring role at Morley it will return to Manchester’s Heaton Park Tramway and there is a possibility that the tram may also play a role in an event in Manchester during September. 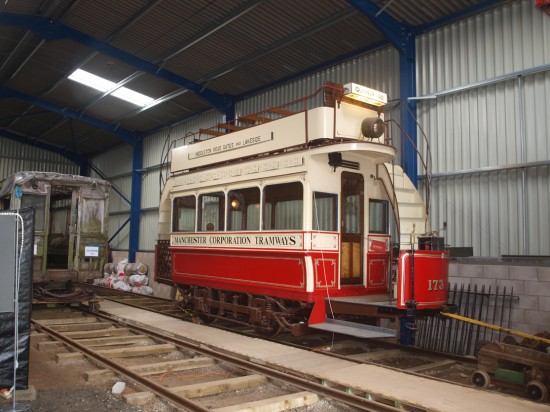 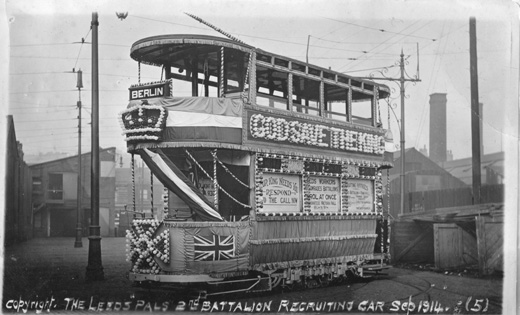 And this is the sort of thing which 173 will be turned into on 2nd August. (Photo courtesy of Leeds Libraries & Information Service)

15 Responses to Manchester 173 – Your Country Needs You!