Return of the Twin car!

In what is probably the best piece of news involving the Blackpool tramway for quite some time, Twin set 672+682 has been moved into the Electrical Compound where it is being prepared for a return to service as one of the tramway’s heritage fleet! Even better, the duo are set to be repainted before entering service – AND it is also expected that fellow Twin set 675+685 will also be back in action on its native system later this year!

It was previously stated that Blackpool Transport would not keep any Twin cars due to their large size, although it is believed that Bryan Lindop had wanted to keep at least one for future use. Now that Bryan has been given the important job of overseeing the operation and maintenance of the heritage trams, it seems that his wish has been granted and both of the transponder-equipped sets are now expected to stay in Blackpool in a very welcome change of policy. 672+682 have already dodged death once before; the set operated what was supposed to be their last ever working in Blackpool for a private hire on the final day of the 2011 season, Sunday 6th November, but then came back out on timetabled service due to a fault with a Balloon car. The future of this Twin set was then thrown into doubt when the Tramway Museum Society reversed its decision to acquire it for the national collection at Crich, and at one time it was feared that the trams may even risk being scrapped. With a number of other preservation bids involving sister cars also falling through soon afterwards, the future of this class looked extremely bleak.

Happily this situation has now completely changed and 672+682 are currently being rubbed down in readiness for their first full repaint since 2003. This will consign the garish orange and yellow Metro Coastlines livery to the history books in favour of a more dignified heritage livery (still to be confirmed), which is sure to be great news for many tram enthusiasts. The pair should be available for use by the summer and should then become a regular sight on the promenade again during the busy illuminations season.

Once set 2 is ready to run, attention should turn to 675+685 which was also thought to have run its last journey on 6th November 2011. Set 5 is expected to retain its Metro livery of red and yellow for now, but it too is likely to receive a former fleet livery at some time in the future. Both of these high-capacity trams should prove invaluable on peak days particularly during the illuminations season, and will add two more enclosed trams to the vintage fleet giving more variety of cars to be used in poor weather.

The decision to include Twin cars in the heritage fleet must be applauded and once again shows how committed Blackpool Transport – and Bryan Lindop in particular – are to catering for tram enthusiasts and tourists who want to experience a ride on a traditional tram along the seafront. As the season progresses and further tweaks are made to the heritage tours, hopefully this venture will become increasingly profitable and grant these fine old trams a secure future in the town where they have spent their entire working lives.

Thanks go to Andrew Blood of ‘Trams Today’ for the information in this article. For more updates, please visit http://www.facebook.com/#!/pages/Trams-Today/144002195699684 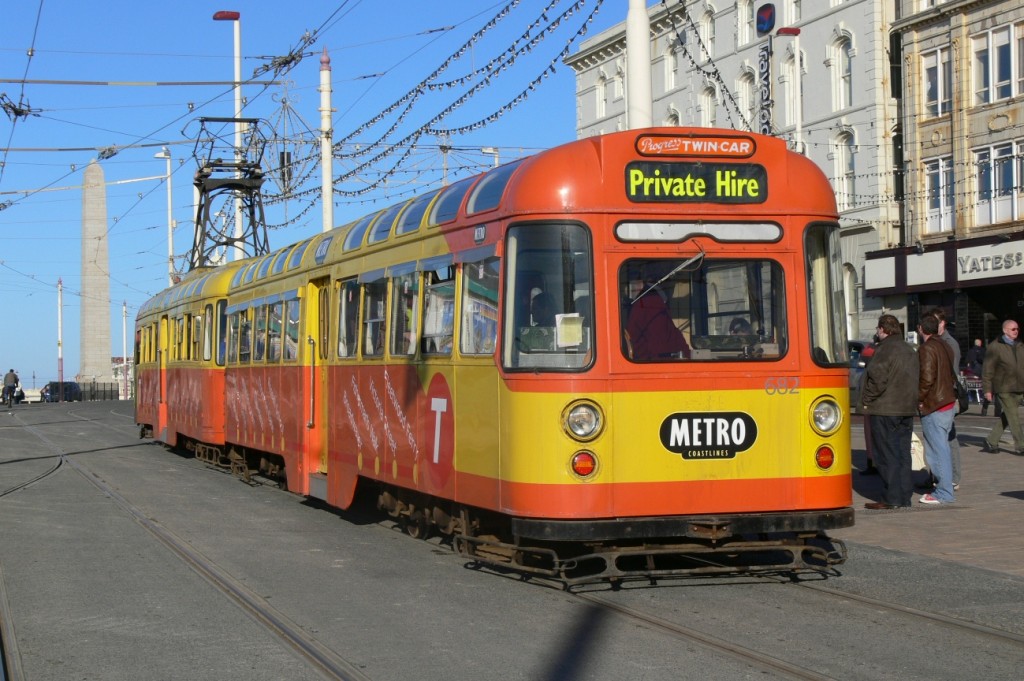 Seen on what was at the time expected to be its last duty in Blackpool, 682+672 are seen in glorious sunshine at North Pier on 6th November 2011 whilst operating a private hire. (Photo by Andrew Waddington)

2 Responses to Return of the Twin car!