The eagerly anticipated move of Blackpool ‘Boat’ 236/607 to Crich Tramway Village took place as expected on Monday 23rd April, making it the second Boat car to leave Blackpool this year. Meanwhile, one of its sisters is being prepared for a comeback of its own – but whilst car 602 was expected to be next through the workshops at Blackpool, 604 has actually been chosen instead!

236 was loaded up in an incredible five minutes, onto a Scott’s Heavy Haulage low loader early on April 23rd and departed Blackpool at around 10:30am, arriving at Crich the same afternoon. Surprisingly, the tram retained its trolley tower for its road trip and was also loaded with various parts, some of which could be useful in maintaining the tram at its new home. The car was unloaded in the Tramway Street at Crich with Scott’s and TMS workshop personnel in charge of the operation, and a little help from the Blackpool electric locomotive which was called out to shunt 236 towards the depots. Of course, the Boat is in familiar territory having run at Crich in 1985 when it was exchanged for Blackpool Standard 40 – but this time it is set to stay there for good having been donated to the Tramway Museum Society. It has been beautifully restored to resemble its 1950s condition without driver’s windscreens, and has therefore been appropriately painted in original livery style, with the later modification of cream headlamps instead of green. It is not yet known when 236 will enter service but as the car has already moved under power at Blackpool since being overhauled, hopefully this will come sooner rather than later.

As if 236 moving to pastures new wasn’t enough excitement for the Boat class, 604 has recently been admitted to Blackpool Transport’s Rigby Road Paint Shop for the first time since 1999! As a number of people have expressed interest in buying this tram and been told it is not up for sale, presumably it is being repainted for further service at Blackpool, which would be a very welcome but totally unexpected development. One theory is that 604 may be in better condition than sister car 602, which was set to be returned to service this year with sponsorship from the George Formby Society. We believe that this contract may have been transferred to 604, although this has not been officially confirmed. Whatever happens, there should be at least two Boats in service at Blackpool this summer – and with 236/607 now at Crich and 233/605 proving popular at Beamish, 2012 should be a good year for the Boats and a far cry from last year when only 600 was operational. 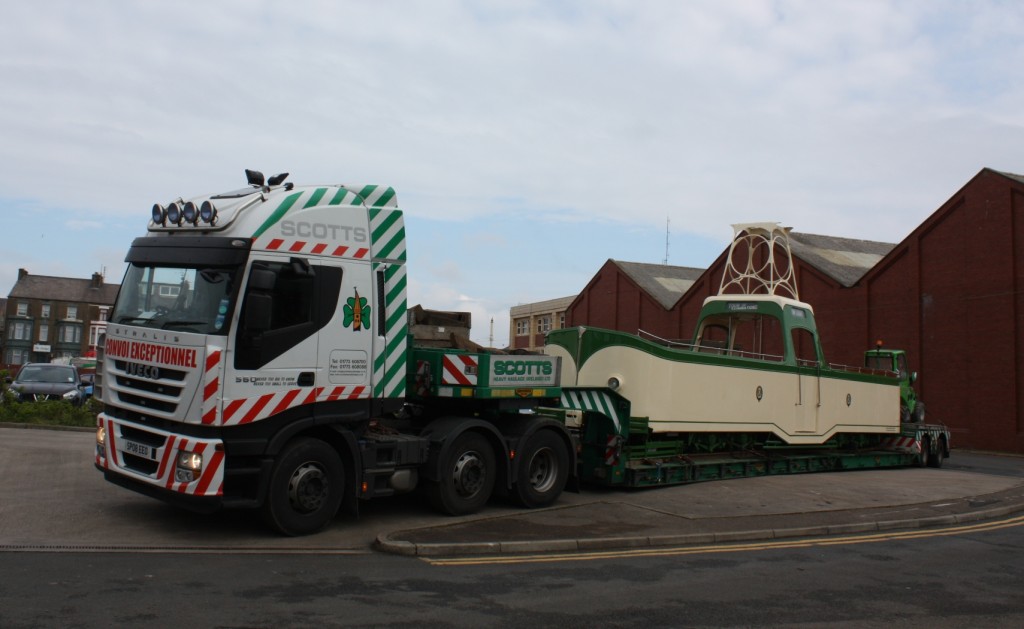 Boat car 236 (or 607 if you prefer!) bids farewell to Blackpool for the second, and presumably final time, as it leaves Rigby Road on April 23rd. (Photo by Andrew Blood)