Picture in Time 12: Burton and Ashby 14 prepares to head to the US

Posted on Tuesday 28 January 2014 by Gareth Prior

At the weekend we featured Burton and Ashby 14 in our “Lost Trams” series including a photo of it after it had been exported to Detroit and now the very same tram features as part of our “Picture in Time” series, this time before it had embarked on its longest ever journey.

We have two photos from Keith Gilliver and Peter White’s collection to share with you the first of which shows the unrestored body of 14 as it arrived at the Model Railway Club where it was to reside before restoration commenced. Note the wheels used to transport the tram body, they were off a cement mixer and the body remained on these until its restoration. Peter White – heavily involved in the idea of having the tram at the clubhouse – is seen on the left of the photo. The Model Railway Club used the body of 14 as a ticket office for model railway exhibitions held at their clubroom and it was kept on their driveway for this purpose. In fact 14 was not the only Burton and Ashby tram saved in the local area as another two bodies were discovered – 6 and 15 – although these were in a worse condition than 14 and after being stripped of any useful parts were scrapped.

The second image is taken shortly before 14 embarked on its journey to the United States. The partly restored tram is seen being loaded onto a transporter lorry at Warrens Engineering (the firm where the restoration in the UK took place) ahead of its initial journey to Liverpool. At this stage the tram remained in the ownership of the Model Railway Club but it was later sold to Detroit. 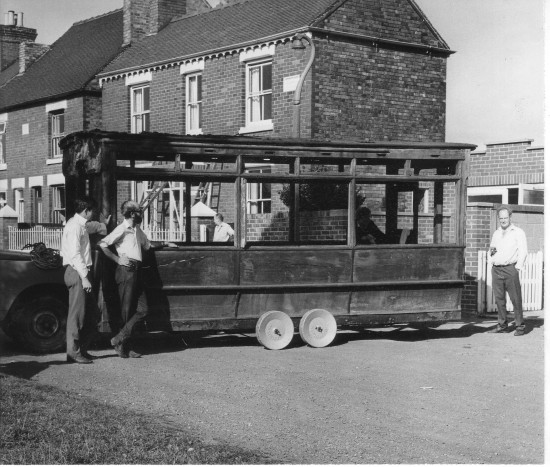 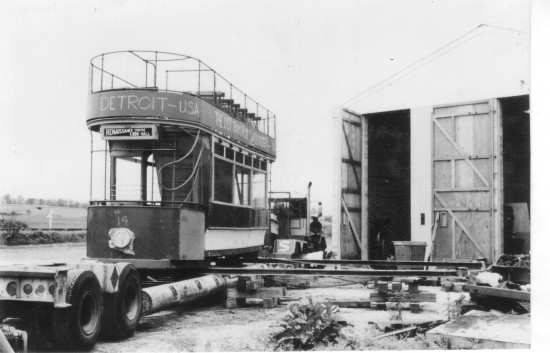 Both photos courtesy of Keith Gilliver