Tram restorations progress in the North

Projects to return two historic trams to fully operational condition in different working museums in the north are currently making good progress, with Sheffield 264 and Glasgow 1245 in the early stages of being rebuilt at Beamish and Summerlee respectively. This report aims to provide an update on both of these exciting projects.

Since being dismantled late in 2013, the good news has kept coming for Sheffield 264, the lower deck of which is under attention in the Beamish Museum workshops. Unusually, stripping of the tram has actually revealed that it is in a far better condition than was suspected, meaning that the work to return it to a serviceable condition should cost a good deal less than was feared. The car’s underframe – which was expected to be beyond salvation – can actually be refurbished and re-used, whilst suspected issues with the main body frame were found to be caused by loose ironwork, which is far easier to rectify. The bulkheads have been braced to strengten the car whilst the work is progressing, and some of the ironwork has already been overhauled and refitted. Externally, the body panels are being rubbed down to obtain a neater finish, when the time comes for it to be repainted. Bearing the latest discoveries in mind, the ambitious target of getting 264 roadworthy in 2015 could well be achieveable.

Meanwhile, up in Scotland, the Summerlee Tram Group are getting to grips with one of their most ambitious projects to date: restoring Glasgow ‘Coronation’ car 1245. This tram has endued a nomadic existence over the years, spending time at both East Anglia and Blackpool, but late last year it was split into three main components; the upper deck, lower deck and bogies. Much like Sheffield 264, the bottom half of 1245 is being tackled first and has now been reduced to a mere framework, on which attention is now being lavished. However, the most visible progress has been concentrated on the bogies, the first of which has already received extensive restoration work and now looks almost as good as new again. With limited resources available, it is likely to be quite some time before 1245 will be completed and ready to operate at Summerlee, but hopefully this restoration job will receive the support it deserves to allow one of the iconic Glasgow Coronation trams to carry passengers in Scotland for the first time since the closure of the city’s tram system in 1962. 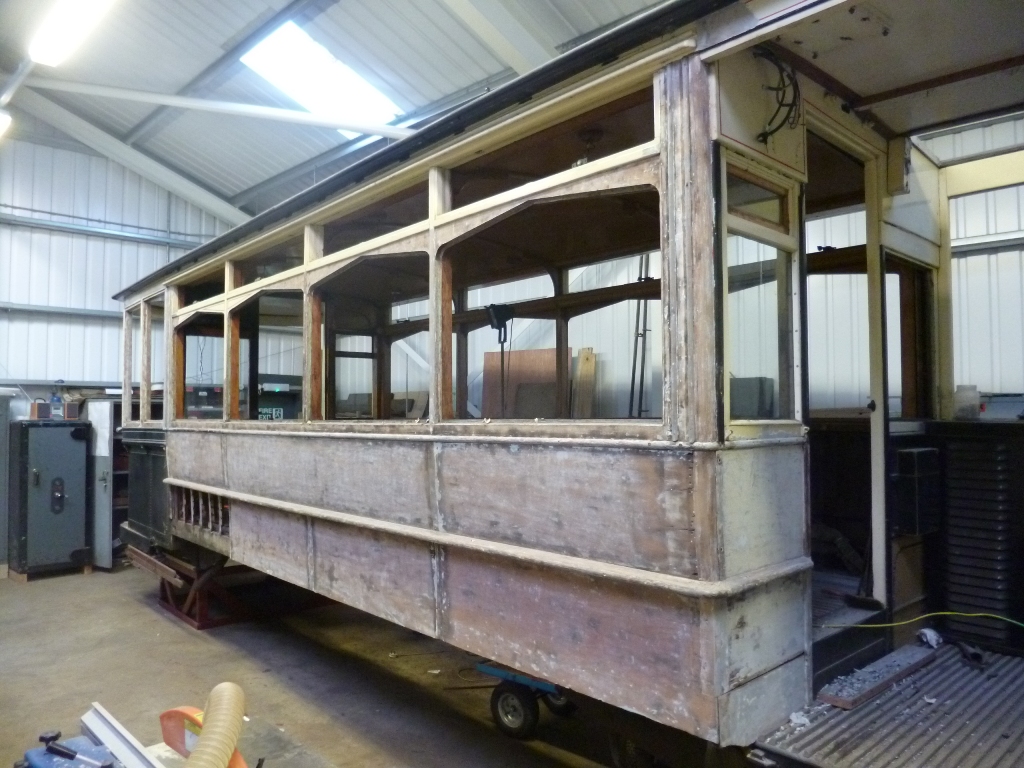 A close up view of one side of Sheffield 264's lower saloon, now stripped of paint and minus glazing. (Photo courtesy of Beamish Transport & Industry Blog)