Open top trams on the move

At the same time as announcing the imminent visit of Blackpool Railcoach 680 to Beamish Museum (see separate news story), the Manchester Transport Museum Society also confirmed that no less than three open-top double-deck trams will be moving to and from Heaton Park in the next few months! This will involve yet another exciting loan arrangement, as well as another historic tram moving to a new home.

It has been confirmed that Stockport 5 will be the star attraction at next year’s main transport event at Beamish, to be held in early April 2014. In return, Blackpool 31 will be heading in the opposite direction for its second visit to Heaton Park. It may be remembered that this temporary of trams was originally planned for April 2013, but for various reasons sadly had to be cancelled at the last minute. However, it is now expected that the two cars will swap places next spring, with 5 moving to Beamish after the Heaton Park Spring Gala and staying until late July. 31 will also operate at Manchester for the same period of time.

The MTMS are grateful to the Stockport 5 Trust for allowing the tram’s loan. Chairman of
the Stockport 5 trust Bob Hill said; ‘This move further cements the already excellent working relationship between Beamish and Heaton Park and the 5 Trust is proud to be a part of this. I cant wait to see 5 carrying passengers along Beamish’s iconic street scene.’

In an unrelated development, a further tram move will see Manchester 173 transferred to Heaton Park during the coming winter. This tram has resided at the Greater Manchester Museum of Transport for many years, but as the museum desperately needs to create additional space, it has been agreed that the tram will move to the park. The construction of the new Lakeside Depot will enable 173 to be housed on site for the very first time, returning it to Manchester tracks for the first time since its restoration began. Although not yet capable of operating in service, this car will be a fantastic addition to the tramway and help to tell the story of Manchester’s transport. 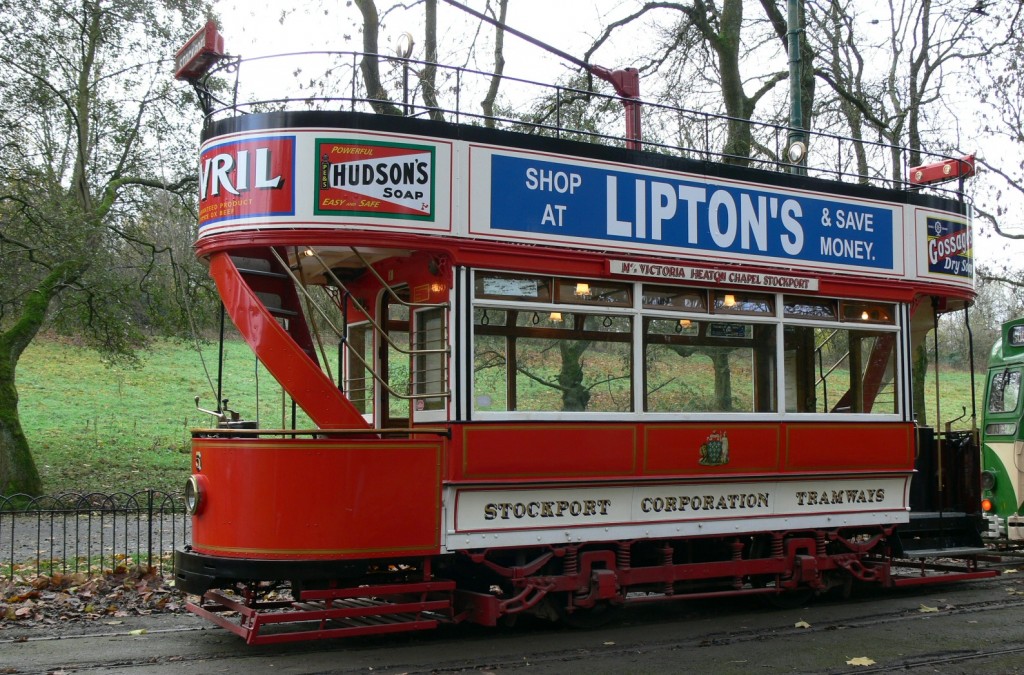 The wonderful Stockport 5 seen in action at Heaton Park on 17th November. The sight of this traditional open-top tram in the period Town area at Beamish already looks set to be one of the big tram highlights of 2014. (Photo by Andrew Waddington)

7 Responses to Open top trams on the move