One of the most popular annual events at Crich Tramway Village was held on Saturday 26th October, in the shape of the ever-popular Starlight Halloween event. For one night only, trams operated in passenger service until 9:00pm and the village was decorated in an appropriately spooky fashion! After dark, the site was bathed in illuminated effects, whilst the woodland walk was transformed with various creepy characters adding to the occasion.

For the trams themselves, the day started in fairly mundane fashion with a three car service utilising Leeds 345, Blackpool 630 and London Transport 1622, whilst Glasgow 812 was used for driving experience trips in connection with the New Members Day. Unfortunately 630 had to retire early due to a fault, although this loss was compensated for as more trams began to enter service from around 2:30pm, including 812 once it had completed its earlier duties. It was joined by Blackpool 166 and 236 as well as Leeds 180 and 399, meaning that all three serviceable Leeds cars were operating together. However, it was undoubtedly the two open cars that stole the show, with ‘Boat’ 236 running with its orange festoon lights ablaze for the very first time, and looking absolutely stunning.

Two trams received Halloween decorations for the event; Leeds 180 was the ‘Ghost Tram’, whilst Blackpool 167 was more extensively decorated as the ‘Skeleton Service’, sporting netting with skeletons, spiders and other Halloween-type creatures inside which were illuminated from battery-operated light effects in changing colours. The crew had Halloween make-up as a vampire and skeleton, and one female vampire passenger was also present. 167 ran to depot crossover, Wakebridge or Glory Mine at the
discretion of the crew, although oddly it did not carry any passengers in this guise. After 6:00pm a split service operated, with trams from Town End to Glory Mine every ten minutes, supplemented by additional cars terminating at Wakebridge to transport visitors to the starting point of the ‘haunted’ woodland walk. Despite poor weather affecting much of the country, it thankfully remained dry until about 8:20pm, by which time most paying guests were leaving anyway, so this did not detract too much from this very enjoyable evening.

Thanks go to Christoph Heuer for providing the above information and all of the accompanying photos. 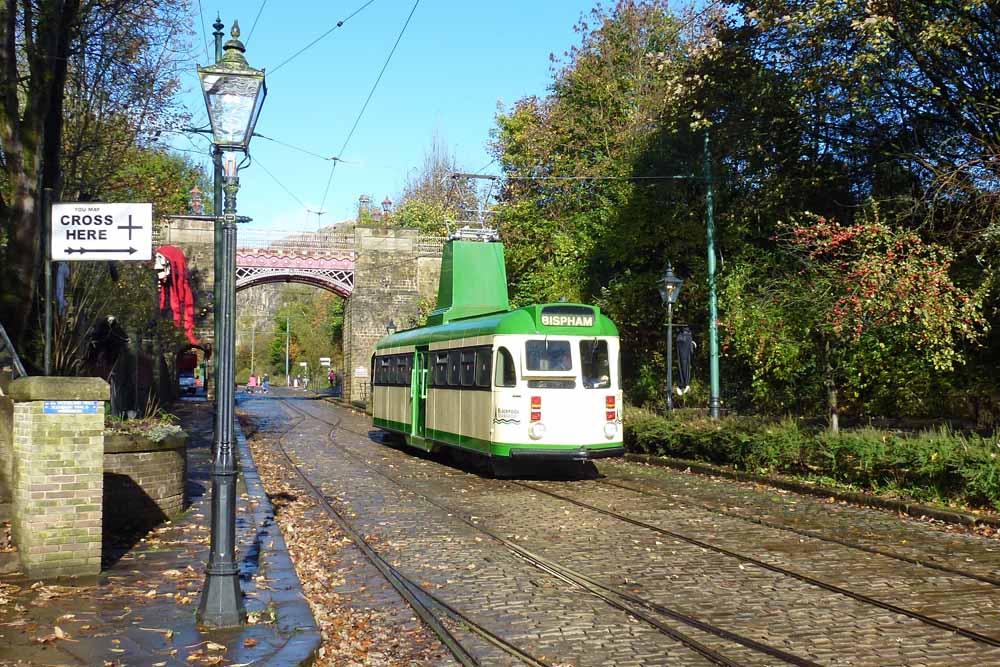 A sunny view from early in the day, showing Blackpool Brush car 630 in service as the first Halloween decorations start to appear around the village site. 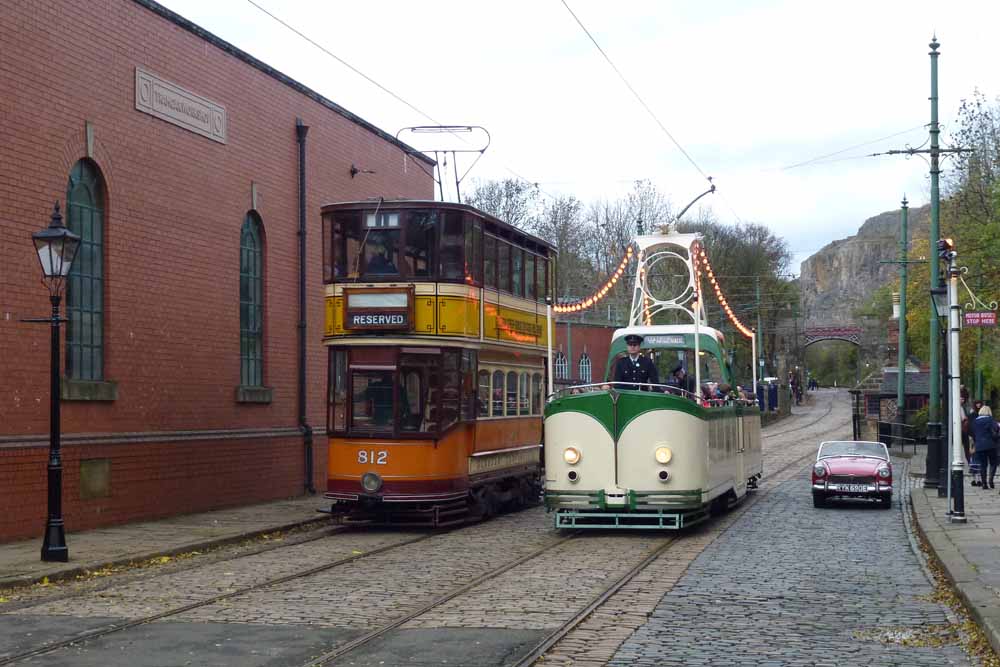 Blackpool 236 arrives at Town End after completing its first trip in service with its illuminated bulbs. Glasgow 812 is passing with new members at the controls as part of a seperate event. 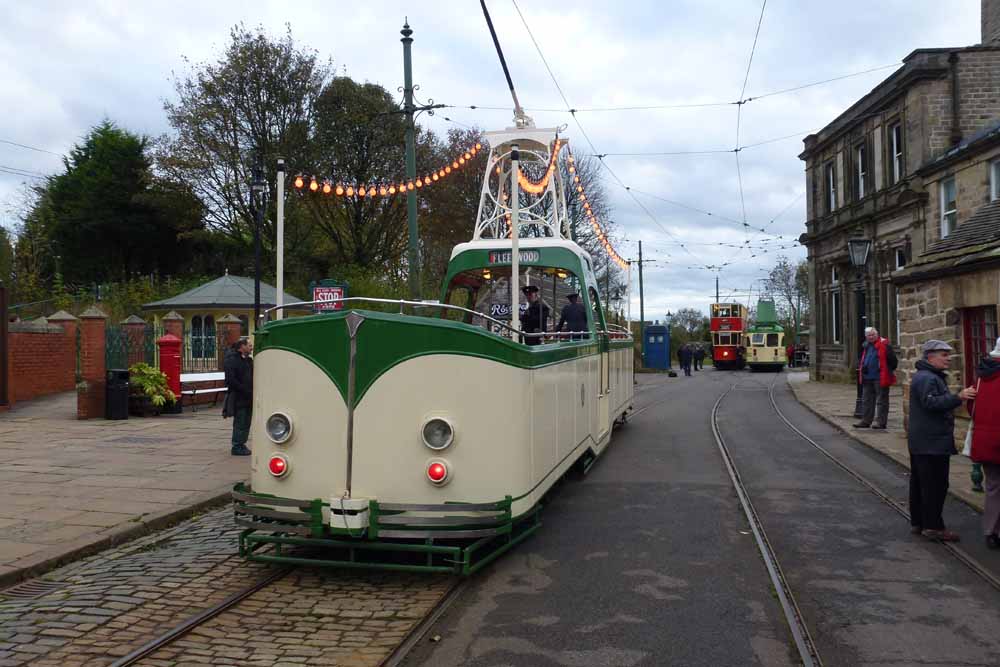 Another view of the illuminated Boat car 236 at Stephenson Place, with cars 630 and 1622 visible at Town End in the background. 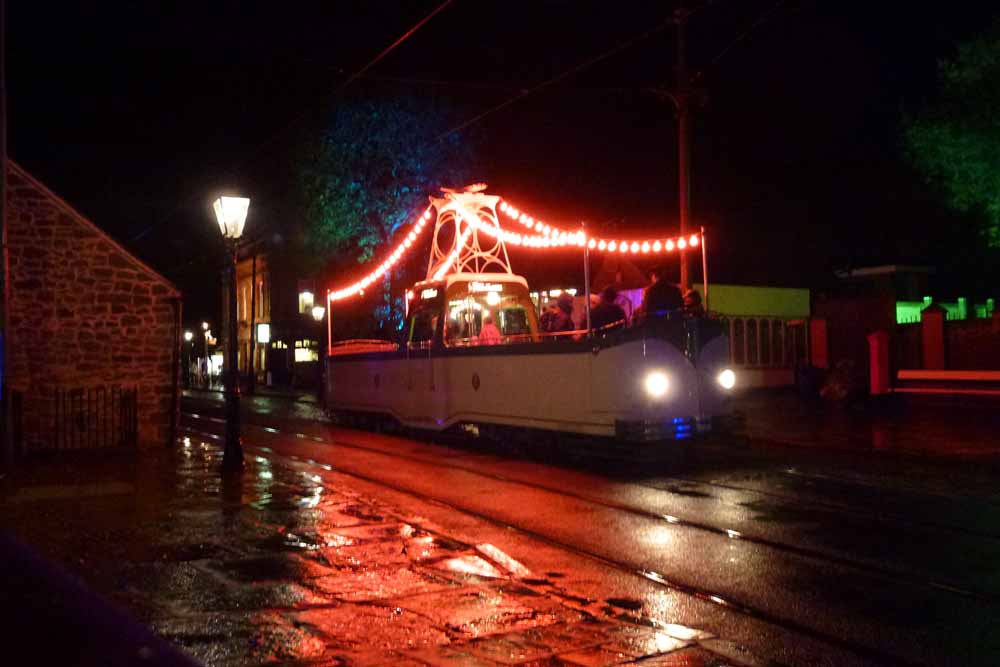 The simple yet impressive lights on car 236 are now shown off to full effect in darkness, again at Stephenson Place. 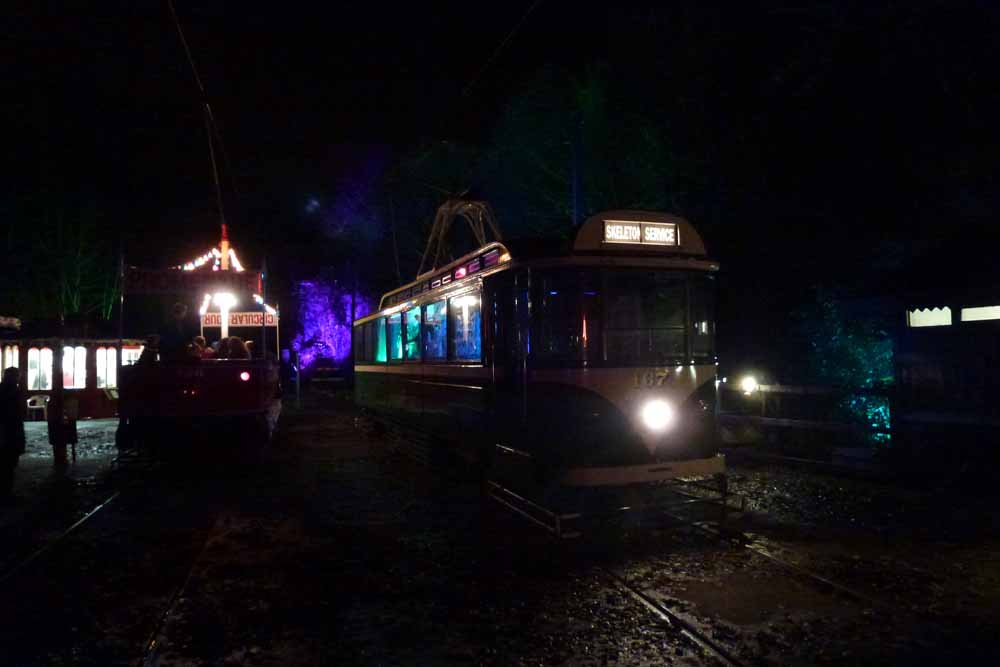 Blackpool 166 & 167 pass at Wakebridge. Note the special 'Skeleton Service' destination on 167! (All photos by Christoph Heuer)

9 Responses to In Pictures: Blackpool trams celebrate Halloween at Crich