One of the most popular attractions of last year’s Blackpool illuminations was the iconic illuminated Rocket 732, which was cosmetically restored and put on static display in the centre of the Gynn Square roundabout in August 2012. The tram has remained there ever since, and has recently received new advertisements for the 2013 season.

A few days after the start of the new illuminations season, the previous adverts were removed from both sides of the tram, including the faces of ‘passengers’ stuck unto the saloon windows. In their place has come new advert vinyls for ‘Blachere Illuminations’, featuring images of lit-up features including a snowman, whilst a grinning Cheshire cat and a bi-plane now adorn the windows. Initially these were applied on the southern side only, but the new vinyls are being progressively added to the north side with only the window stickers remaining to be added at the time of writing. Whilst some of these were being applied on the morning of Monday 9th September, the opportunity was also taken to rectify a fault with the floating spaceman suspended above the tram, which should also be illuminated but which was in complete darkness last weekend.

Meanwhile at the Pleasure Beach loop, some work has also been carried out on Brush Railcoach 290, owned by the Fleetwood Heritage Leisure Trust following its graffiti art makeover during the summer. Some chain lights have been strung from its trolley tower which has also been enlivened by the addition of flags, whilst some basic lights have been placed alongside the tram to make it a more prominent display at night during the illuminations. Unfortunately, the planned application of artwork on the other side not painted in June has still not been carried out, and instead the seaward side has been given a fresh coat of gold paint. Sadly this was applied rather crudely and indeed the new paint has streaked badly already, whilst the previous Diamond Jubilee livery can clearly be seen underneath. Hopefully this car will move under cover once the 2013 illuminations are over to ensure that it does not suffer another winter in such an exposed location. 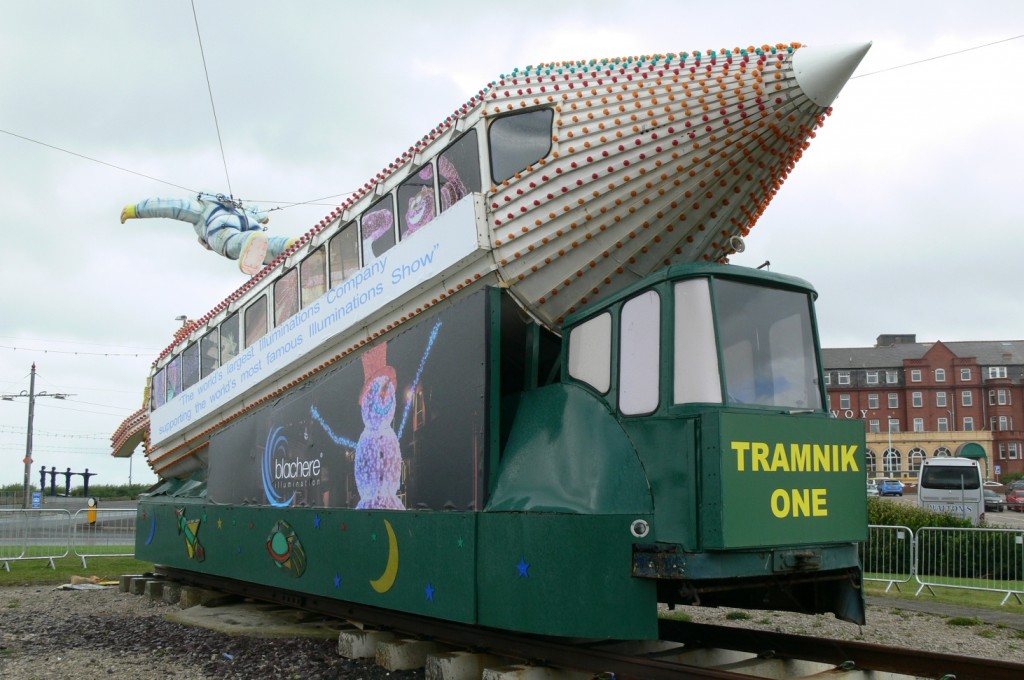 A look at the newly applied advertisements adorning Rocket tram 732, still in its familiar spot on the Gynn roundabout. (Photo by Andrew Waddington)