In Pictures: Metrolink 3075 changes its vinyls for The Trafford Centre

Over the years of modern tramways it has been fairly rare for the same company to continually advertise on the same tram with different promotions but Manchester Metrolink’s 3075 is bucking that trend as it is now onto its third different design for The Trafford Centre in less than a year!

Once again using a mainly red background, this latest advert uses the slogan “Exclusivity for everyone”. 3075 first received adverts for The Trafford Centre in July 2021 (“Summer Social”) before these were replaced in September 2021 (“Get Out of Town”). And now in June 2022 it’s the third different design for the shopping centre.

Of course, this is not the only tram to have advertised The Trafford Centre as back in March 2020 (when still owned by intu) they advertised on 3073 (to coincide with the opening of the Trafford Park extension) with this advert remaining in place until February 2021.

A couple of other advert changes have seen vinyls removed on 3076 and 3088. 3076 has lost its advert for NOCCO (applied August 2021) whilst 3088 is now in fleet livery again after its Charlotte Tilbury ads were taken off (only added to the tram back in April 2022). 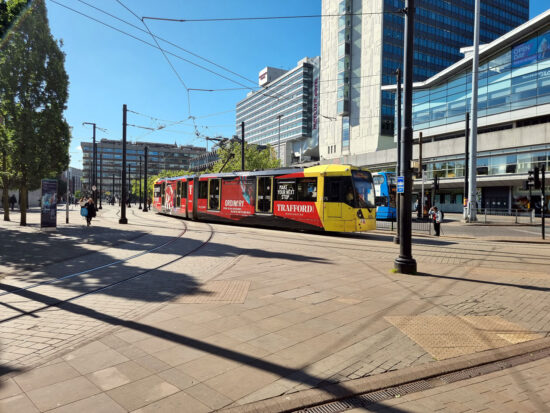 3075 in Piccadilly Gardens showing off its new ad for The Trafford Centre. 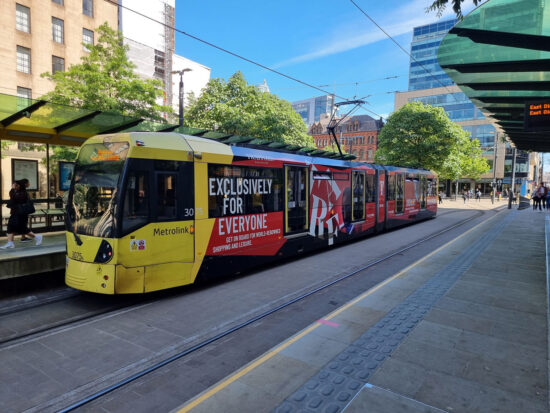 And then later on it pasues at St Peter’s Square. (Both Photographs by Michael Morton, 20th June 2022)