In Pictures: A new advert for West Midlands Metro 39

There may not have been a passenger service on the West Midlands Metro for over two months but it still hasn’t stopped local companies wanting to advertise on the trams with Urbos 100 39 being seen during driver familiarisation carrying a full vinyl wrap for the University of Birmingham.

When trams on the West Midlands Metro first started to receive adverts they were of a similar format to that seen in Edinburgh with full height adverts on just a couple of sections with the remainder of the tram just having ads above the windows but this design for the University of Birmingham follows in the footsteps of Urbos3 22’s ad for the Metro Academy. This means the whole tram is covered in vinyls – including the windows.

The design advertises various bits of the University of Birmingham, including their concerts, the Lapworth Museum and Winterbourne House and Garden.

With 39 still being relatively new it will come as no surprise that this is its first advert.  It’s the second Urbos 100 to have received an advert (42 has ads for Nourished but in the full height/above window split) and the fourth tram overall to currently carry advertising vinyls (Urbos3s 19 and 22 also have ads). 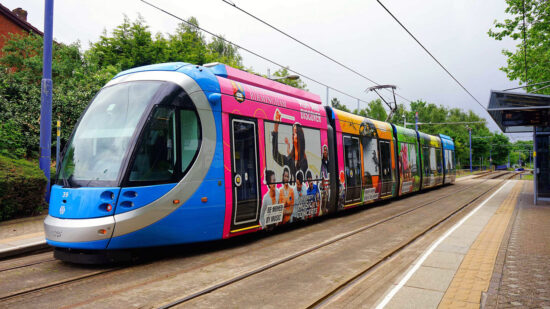 39 at Black Lake showing off its new advertising vinyls for the University of Birmingham.

A closer view of the first two sections of the advert.

The other end of the tram with these sections having different designs again. 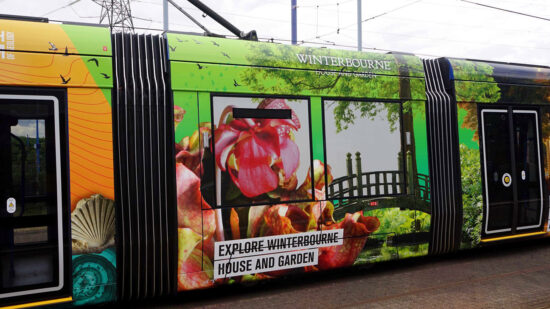 And another of the different sections of the advert, this one for Winterbourne House and Garden which is owned by the University. (All Photographs by Andy Walters, 30th May 2022)

1 Response to In Pictures: A new advert for West Midlands Metro 39