In this edition of “Picture in Time” we head to Blackpool again with an image which just says Blackpool all over it – trams and the Tower what more is there to say!

This image was taken during 1984 when Blackpool Tower was under attack from King Kong! Quite why it was decided that King Kong should pay a visit to Blackpool and be attached in such a prominent position seems unclear although it was there to help the Tower celebrate its 90th birthday (what more could you want to celebrate your 90th than a visit from King Kong!). Looking over holiday makers, traffic and trams alike it certainly makes for a distinctive look!

In the foreground of this shot we see two Balloon Cars which are believed to be 703 on the left and 712 on the right, both trams which originally started off as open toppers but were enclosed during the early 1940s. While 703 retains a trolley (and roof windows), 712 had become the first of the Balloons to be permanently fitted with a pantograph in August 1984. 712 is also in the more modern 1980s fleet livery while 703 is still in the 1970s style. 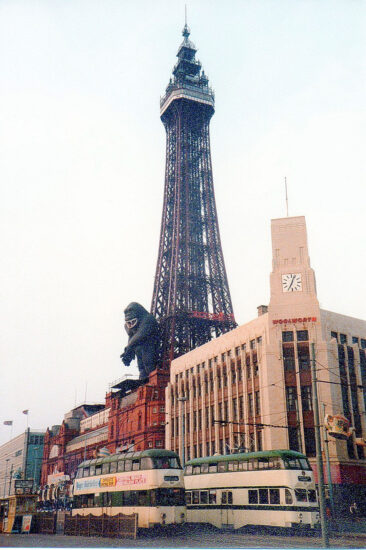