In Pictures: A variety of seasons in one weekend at Blackpool’s Vintage Weekend!

Posted on Monday 21 February 2022 by Gareth Prior

There’s always a risk when organising special events in the British Isles that the weather may play a part and so it proved for the first major event featuring Blackpool Heritage Tram Tours with rain, snow, wind and sun all featuring at various times. Taking place over the weekend of Saturday 19th and Sunday 20th February, the first day saw the relatively rare sight of snow in Blackpool and the even rarer sight nowadays of heritage trams running through it!

The weather had already played its part before the weekend’s main events got underway as Storm Eunice had made her presence known the previous day which had seen the entire tramway suspended – which meant that the planned evening tour on Friday 18th February was postponed, so things didn’t get underway until Saturday 19th February with the main highlight being a six-tram hop-on, hop-off timetabled service with journeys running between various stops from Pleasure Beach to Fisherman’s Walk in Fleetwood.

The weather also played a part in which trams would run as the original plan had seen both Boat 600 and Bolton 66 allocated to service but it had been announced the previous day that they would be substituted by Brush 621 and Balloon 715 for pretty obvious reasons. In addition to those two, Brush 621, Centenary 648 (its first use since 2020), Balloon 717 and Rebuilt Balloon 718 were in service whilst Balloon 711 was the Shop Tram at North Pier, with it running in service at the end of the day too.

The day started off with rain, which then turned into snow and it then ended with sunshine – the Great British weather!

Things didn’t go without incidence and in another throwback to how things used to be every winter, Centenary 648 suffered a fault when working a service southbound to Pleasure Beach. It lost power around 1520 at Manchester Square and had to receive fitters attention which enabled it to get to Pleasure Beach. However, the decision was taken to remove it from service and it returned to depot missing out on a journey to Fleetwood. The failure of 648 did lead to a few delays with a queue forming behind it including a Flexity and Brush 631.

The end of the hop-on, hop-off timetabled wasn’t the end of the day heritage tram-wise though as the Western Train ran not one but two Evening Tours. The first, departing North Pier around 1740, was a replacement tour for the Friday Evening Tour which was unable to run. 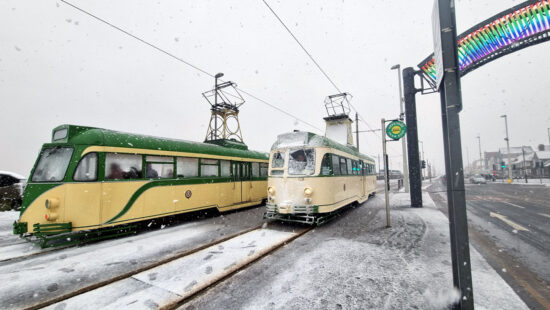 Trams in the snow! Brush Cars 621 and 631 pass at Bispham as they go their respective ways. 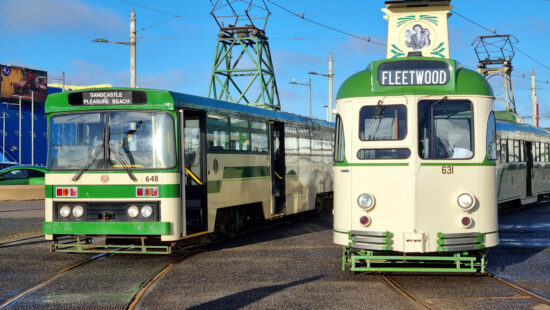 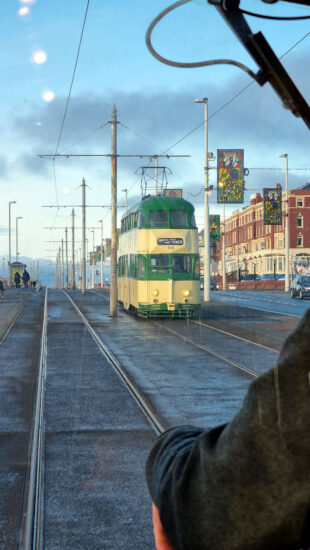 From snow to sun! Balloon 715 is seen between Cliffs Hotel and Gynn Square as it heads back to North Pier and Tower. (Photographs x3 by David Maxwell, 19th February 2022)

A video of the trams running in the snow on Saturday 19th February from Ian Summerfield is available below:

The second day of the weekend and whilst there was no snow it was still a bit of a wild day with rain and wind affecting things and probably helping to keep passenger numbers down.

Another six tram hop-on, hop-off service was in operation with Brush Cars 621 and 631 joined by Balloons 700, 715, 717 and Rebuilt Balloon 707 in running. Again, the day wasn’t without incident with 700 having to be taken out of use after suffering problems on a southbound journey from Fleetwood, firstly with power supply problems and then suffering a damaged door after the wind took control. It returned to depot and was replaced in service later on by Modified Balloon 718.

The Evening Tour with the Western Train was also changed with the planned run down to Starr Gate abandoned because of concerns with the high winds. The tram instead turned on Pleasure Beach loop. 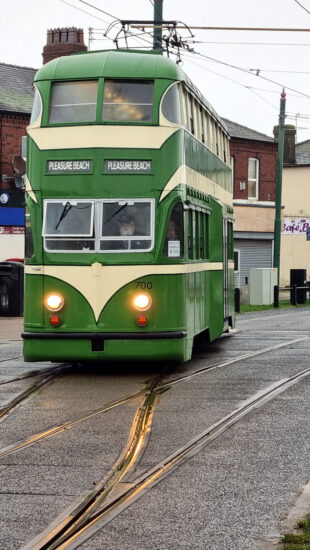 Having made its way to Fisherman’s Walk, Balloon 700 uses the crossover ahead of its southbound return. 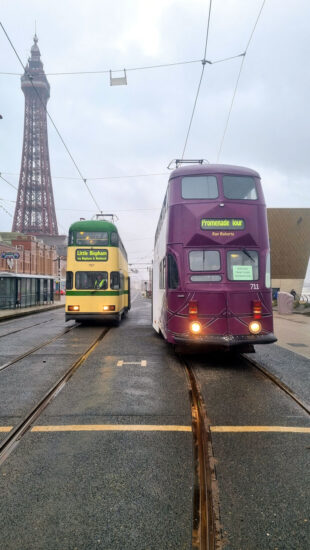 Balloon 711 was again the Shop Tram at North Pier and the Tower and was joined in this shot by Modified Balloon 707. 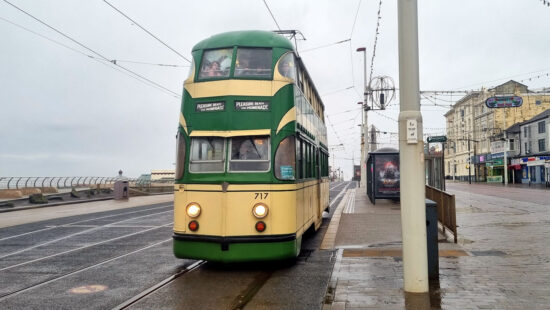 Balloon 717 was the replacement for Centenary 648 on the Sunday and is seen here at North Pier and Tower heading south. (Photographs x3 by David Maxwell, 20th February 2022)

Despite the obvious challenges of the weekend, Blackpool Heritage Tours managed to put on an enjoyable event for those who visited providing as much variety as possible (in trams and weather!), showing just what is possible. The next event weekend is 30th April to 2nd May.

This entry was posted in Blackpool Tramway, Trams in Video. Bookmark the permalink.

1 Response to In Pictures: A variety of seasons in one weekend at Blackpool’s Vintage Weekend!