Posted on Friday 28 January 2022 by Gareth Prior

This next set of archive modern tram images returns to the West Midlands as we feature the Midland Metro system starting off in 2014 at a now closed stop.

When Midland Metro first opened in 1999 it ran between Birmingham Snow Hill and Wolverhampton St George’s with its southern terminus being located with Snow Hill Railway Station. A rather cramped terminus which featured an island platform with tracks either side it was reached by a single track which ran between the railway station platform on one side and an office building on the other. This single track approach was a capacity constraint from the start and with Network Rail also wanting to increase capacity at the railway station it was to close on 24th October 2015. The Metro line has since been extended into Birmingham City Centre but the hoped for use of the area the tram line vacated for national rail services have yet to materalise.

This photo was taken on 25th January 2014 and perfectly frames two of the T69 trams awaiting departure north to Wolverhampton St George’s. 16 – the last T69 to be left in Birmingham – is on the left and 14 on the right. The escalators leading from concourse to platform level nicely split the trams and the railway tracks into and out of Snow Hill can be seen the other side of 16. 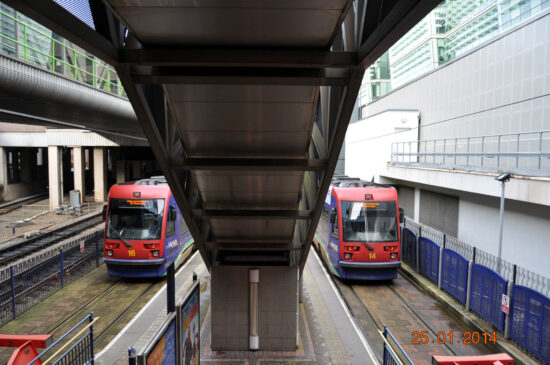