As well as the work underway at Picardy Place there remain several other active worksites along the route of the Trams to Newhaven project as work continues to move on at a pace. One of those sites is on Leith Walk at Pilrig, close to the site of the infamous Pilrig Muddle, as we see in this latest update.

The so-called “Pilrig Muddle” was where tram passengers from Leith to Edinburgh had to change trams for two decades at the start of the 20th century when the two municipalities went down different routes when updating their tramways in terms of traction. It wasn’t always so as from 1871 there was a through horse tram route operated by Edinburgh Street Tramways but after 1893, when most of their routes were taken over by the Edinburgh and District Tramways Co Ltd, the city decided to go down the route of using cable traction. This meant that between 1899 and 1905 anyone wanting a through journey had to change at Pilrig between horse and cable tram.

Leith Corporation took over the route in their area from 1904 and in 1905 decided to update the traction, so you’d think problem solved. Wrong! They didn’t want cable trams in Leith and so electrified with overhead power and so from 1905 it was still change at Pilrig if you wanted to carry on your journey. And so it continued until Edinburgh Corporation decided not to renew the District Tramways Company lease and took over the operation of the city’s tramways in July 1919, soon planning to stop cable operation and go for overhead power instead. It would take until 20th June 1922 for through trams to run (Leith Corporation Tramways and Edinburgh Corporation Tramways had merged in 1920) and so the “muddle” was finally over. 123 and invited guests ran up from Leith Depot and broke a blue ribbon to mark the first time since 1899 that you could catch a tram straight through.

There won’t be any problems of having to change trams at Pilrig on the Edinburgh Trams system and construction work is now progressing well at this location with attention recently being turned towards the Airport bound track. 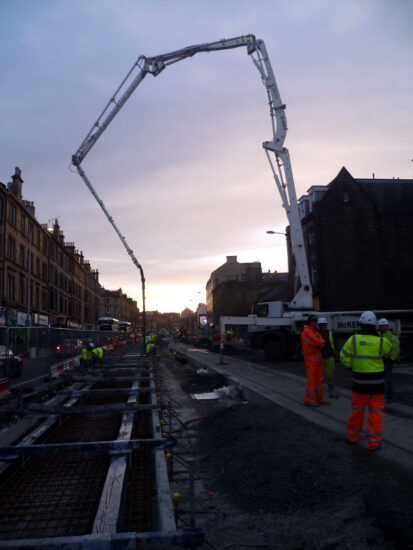 This view is looking towards the city centre at Pilrig with the last vestiges of daylight as more concrete is poured to surround the track. The Newhaven bound line already has concrete down with the left hand side showing the line into the city and then onto the Airport. (Photograph by Roy Calderwood, 20th January 2022)