Out and About: On Nottingham Express Transit in December

Posted on Sunday 26 December 2021 by Gareth Prior

In this latest edition of “Out and About” the photos comes from Nottingham Express Transit as we take a look at some of the adverts currently being carried on the trams – both the sole full vinyl wrap as well as a couple of the more standard external advertising. 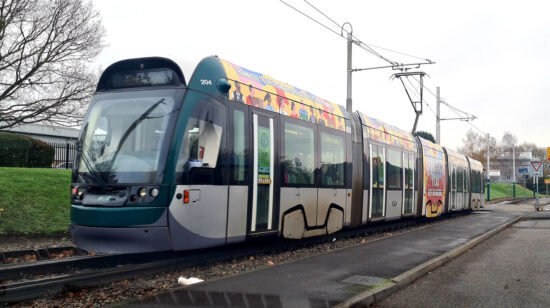 Its been over a year that Incentro 204 has carried these special adverts thanking key workers for keeping Nottingham and the country as a whole moving throughout the pandemic – especially in the early days. The colourful advert includes a full height advert on the centre section with above window ads on the rest of the tram. This image was captured at Phoenix Park.

Its an altogether simpler affair for Incentro 201 which just had a single advert on the full height of the centre car for School of Rock which was showing at the Theatre Royal during November. Phoenix Park again.

Out at Moor Bridge on the line to Hucknall this image shows the only full advert on the network at the moment – 212 and its Carbon Neutral Nottingham 2028 design. With no external numbers visible this shot shows the blue end of the advert. 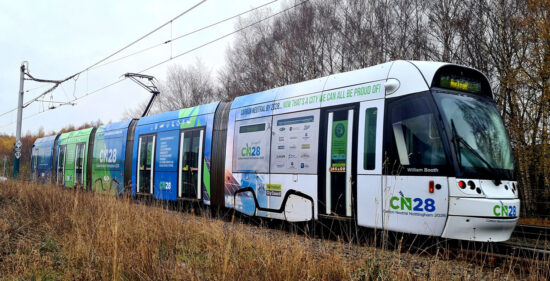 And the other end of the tram shows the lighter part of the advert. The tram heads away from the camera at Moor Bridge. (All Photographs by Andy Hollis, 3rd December 2021)