In Pictures: Delays continue on Tyne & Wear Metro and in Blackpool

Posted on Monday 29 November 2021 by Gareth Prior

Storm Arwen may now have blown away but its after effects are still being felt with both the Tyne and Wear Metro and Blackpool Tramway in particular seeing ongoing disruption as at the evening of Monday 29th November. Whilst things are improving on the Metro for Blackpool there remains no service north of North Pier with now the Metropole Hotel found to have suffered structural damage during the storm.

In the northeast first and the Tyne and Wear Metro remained fully suspended until 0700 on Sunday 28th November at which point services resumed between North Shields and South Shields. Then from 1600 there was a resumption on the full line between St James and South Shields in both directions and two hours later trains started to run from South Gosforth to Park Lane. The start of service on Monday 29th November and a service was able to resume from the Airport to South Gosforth but the section between Park Lane and South Hylton remained closed and is still not running at the time of publication with Network Rail still completing repairs which are estimated for completion during Tuesday 30th November.

The damage caused to the Metro has been described as the most serious in its entire 41 year operating career. Nexus work crews had to deal with numerous fallen trees and downed overhead wires which saw work take place in freezing conditions around the clock.

Martin Kearney, Nexus Chief Operating Officer, said: “This was one of the worst winter storms to hit the Tyne and Wear Metro in its history, but our maintenance teams rose to the challenge magnificently, pulling off our biggest every recovery operation. My thanks go to our customers for their patience during that period of major disruption. And my thanks go to all of our employees who have worked so hard, both during and after Storm Arwen had hit. They’ve really worked a miracle given the unprecedented scale of the damage that they found.

“It’s testament to their skill, dedication and professionalism that we have been able to get the system back on its feet so quickly, and in time for the start of the working week. The big challenge was having to undertake repairs at so many different sites. There were fallen trees at seven locations and it caused power lines to be torn down. In some instances more than just one tree had fallen on to the tracks. Resources were stretched like never before.

“The storm led to an unprecedented number of trees falling across Metro lines.  We are already in discussion with the Department for Transport about the future funding required for Nexus to continue to maintain and renew Metro’s infrastructure, and the way we manage vegetation forms a key part of that ask, so we can ensure that ageing trees do not undermine the safe and reliable operation of our system. Our people are used to working in all kinds of weather, but the freezing conditions in the aftermath of the gales were particularly brutal, and yet they got through an astonishing workload on Saturday and on Sunday. I’m proud of them.”

Meanwhile over in Blackpool and the tramway remains only open from Starr Gate to North Pier. As we saw over the weekend the storm had caused damage to a building opposite the Metropole Hotel but after further investigations it has now been confirmed that the Metropole itself also suffered from damage and as a result the trams are not currently able to operate any further north than North Pier.

Coupled with the planned closure of the southbound line north from North Pier to Cabin for welding works trams from Starr Gate are only running in passenger service as far as Tower from where they head to the crossover just beyond the loop line at North Pier and reverse with their journey recommencing from North Pier southbound. A bus replacement service to Fleetwood has been advertised as starting from Pleasant Street (due to the closure of the Promenade it wasn’t possible to run any closer to the town centre because of congestion) although observations failed to note this actually running on a regular basis. The timetable states this is due to run every 30 minutes.

With no trams north of North Pier it has not only affected the core tram service but also Heritage Tram Tours. Whilst the Magical Express Tour is unaffected as it only runs North Pier-Pleasure Beach for Illumination Tours it is a major change with it advertised that these would run to a revised route and a change of tram.

Trams are due to return north of North Pier from the start of service on Tuesday 30th November. The previously announced single line working from North Pier to Cabin will remain in place. 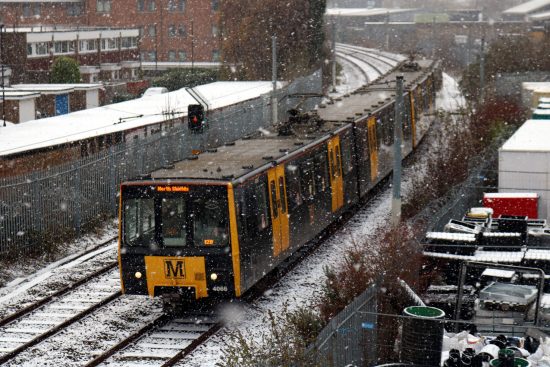 4066 heads a train that will unusually terminate at North Shields. Seen in South Gosforth during the snow of Storm Arwen. (Photograph by Trevor Hall, 28th November 2021) 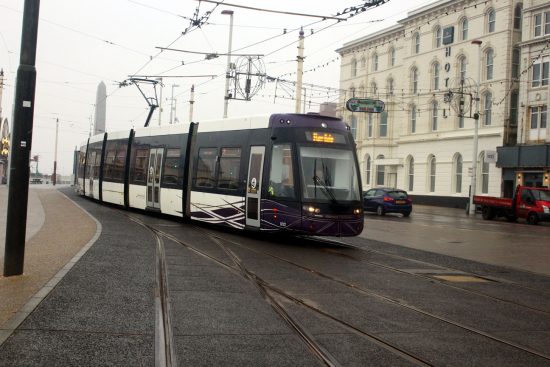 In Blackpool and 002 uses the crossover at North Pier to regain the southbound track for its return trip to Starr Gate. 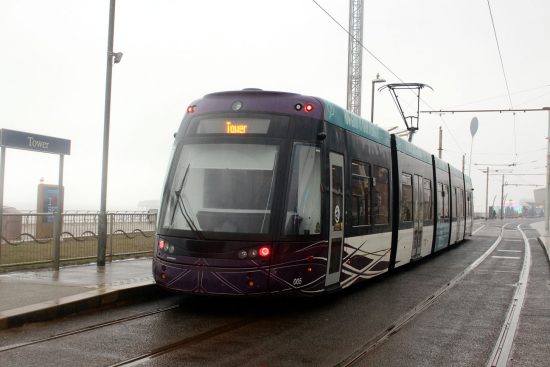 005 reaches the end of its journey at Tower. Once all passengers are off it will head north to the North Pier crossover before returning southbound. 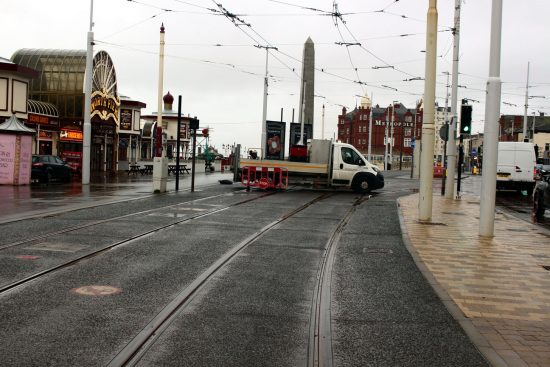 Welding work is due to take place this week but at the time of these photos had yet to start although the line was barriered off. 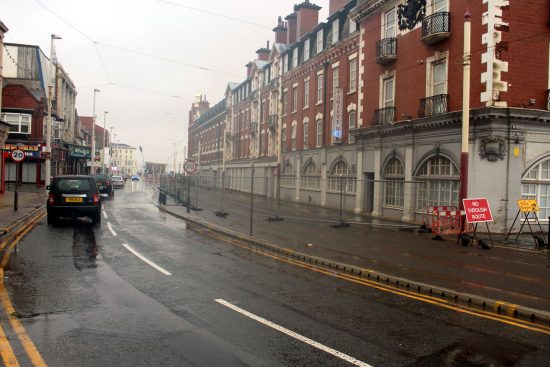 The track in front of the Metropole is cordoned off – along with the footpath immediately by the hotel – preventing any trams from travelling by. (Photographs x4 by Tony Armitage, 29th November 2021)