In this edition of “Picture in Time” we take another trip across the Irish Sea to view a photo taken on the Manx Electric Railway.

Taken in mid-September 1990 this image was captured at Laxey Station where we can see the classic enclosed motor and open trailer combination. We can’t fully identify the trailer but we can clearly see that the motor is 1894 built Tunnel Car 5. In fairly standard livery – with the Manx Electric Railway Co Ltd legend on the side – at this point in history 5 had its headlight repositioned higher than the traditional position (something since remedied).

The pair will soon depart further north for Ramsey – with a few passengers just visible in the motor waiting for the off. A number of passengers have either just got off these trams and are now crossing the tracks or there could be possibly be an obscured Snaefell Mountain Railway car in the station as well. 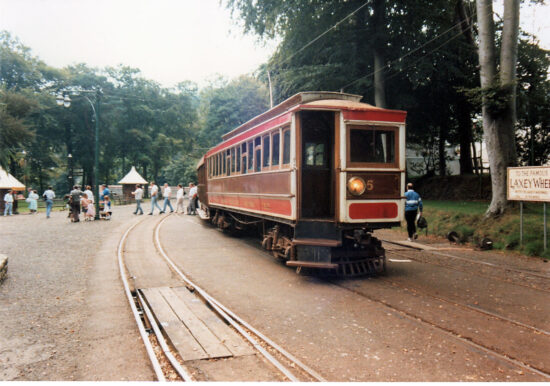