Posted on Saturday 4 September 2021 by Gareth Prior

There are now no Manchester Metrolink M5000s waiting to be commissioned to carry passengers for the first time following the entry into service of 3129. The tram has been the fastest of all of the batch of nine new trams which have arrived from late 2020 to enter service having been first seen in action on Sunday 29th August.

3129 arrived at Metrolink’s Queens Road Depot on 7th August and after the usual commissioning and mileage accumulation process was cleared for service towards the end of the month. Its first noted appearance was on the Eccles to Ashton-under-Lyne service on Sunday 29th August, although its not known whether it may have been used earlier than this.

If 29th August is confirmed as its first day that is just 22 days since delivery – the previous quickest of this new batch of 27 trams being built by Bombardier was 23 days (so only just quicker but still quicker!). That was 3128 which was delivered on 17th July and entered service on 9th August.

There are still a further 18 M5000s to arrive in Manchester. Deliveries do seem to have settled into a fairly regular pattern of every 3-4 weeks now which could mean that this coming weekend will see the next one turn up at Queens Road Depot. 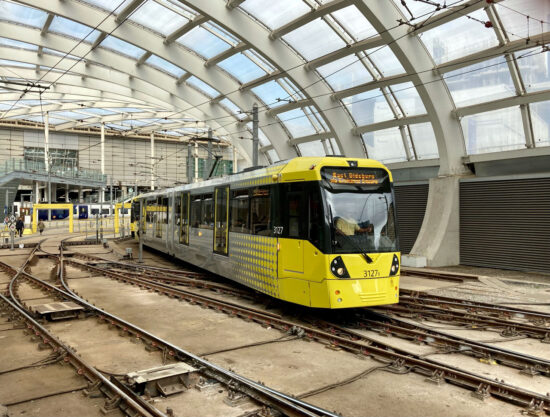 One of the previous trams to enter service was 3127 which we see for the first time on British Trams Online as it leaves Victoria with a service to East Didsbury. (Photograph by Lee Stanford, 25th August 2021)