Tram Pub Signs: The Foot of the Walk, Edinburgh

We return to take another look at a “Tram Pub Sign” with a trip into Edinburgh and a pub which, unlike all those we have seen in the series so far, will in the near future actually see trams running past again. The pub is owned by Wetherspoons and is the Foot of the Walk in Edinburgh.

Foot of the Walk is on the corner of Constitution Street and Baltic Street and hopefully by this time in 2023 real life trams will be running by it to and from Newhaven. The building that the pub is in started off as the Palace Picture House with this closing in 1966 and then being converted into a snooker hall.

The pub sign features a general street scene but included in that is a horse tram in the lower left hand section. It doesn’t appear to be a specific type of horse tram but is still recognizable as one. 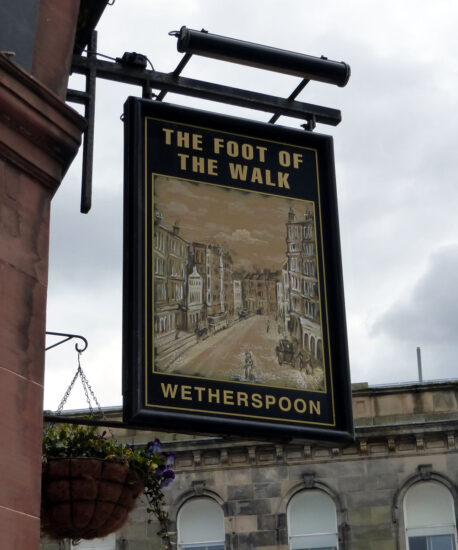 An image of The Foot of the Walk pub sign. (Photograph by John Hampton)