Stockport 5, Seaton Tramway and Metrolink 3073 win at the Tram of the Year!

It’s a tram which has so often been the bridesmaid in the British Trams Online Tram of the Year contest but at the fourth time of asking it has finally won the main “Tram (Traditional) of the Year” category – that tram is Heaton Park’s Stockport 5! Other winners in this contest have been the Seaton Tramway which is named both “Tramway of the Year” and “Event of the Year” (for the 50th Anniversary event) while the “Tram (Modern) of the Year” once again goes to Manchester Metrolink with 3073 becoming the fourth of the M5000s to win that category.

Whilst 2020 was one of the most difficult years in living memory across society, Stockport 5 was still able to re-enter service at the start of December (just squeaking in to the nomination period!) and it then went to see regular use during the Lightopia Festival. It had last run in passenger service back in 2013 and since then a comprehensive overhaul has been completed on the tram which was nearly completed as the first lockdown hit us in March 2020 with the finishing touches then taking place to allow it to play a major role in December. The tram, which is now a fully fledged part of the Manchester Transport Museum Society fleet, had previously been runner-up in 2011 but nine years later finally wins the award! 5 received slightly over 50% of the total valid votes with a total of 296 of you deciding it had done enough to be named “Tram (Traditional) of the Year.

Seaton 4 was pipped to the post in the main category (coming in second with 222 votes – 38.81%) but the Seaton Tramway are still celebrating having won the other two awards they were nominated for – “Tramway of the Year” and “Event of the Year”. With the 50th anniversary of the opening of the tramway during 2020, despite all the restrictions in place across the country they managed to celebrate it – albeit in a lower key manner than they had originally hoped! – with a special “nearly all trams out day” in August. There may have been social distancing measures in place during the event but that still didn’t stop those who attended from having a good time and with no. 4 used during the event it proved to be a popular way to spend an August day! 276 votes were recorded for event (52.17%) with Blackpool Tramway’s 135th Anniversary weekend – which included a six tram parade – coming in second with183 votes (34.59%).

Keeping with the Seaton Tramway and they were the clear winner in “Tramway of the Year” with 57.79% of valid votes (308 votes) being registered. The first heritage tramway in the UK to resume operations once restrictions were lifted enough they quickly put in place new procedures to make everyone feel safe when visiting and managed to operate regular services for the rest of the year, including Twilight Trams during December, and only brining the season to an end when more restrictions were put in place around Christmas. The tramway also kept many entertained during lockdown with regular Live videos on their Facebook page – including the 24 hour Tramathon which saw trams running along the line for a full 24 hours in June.

The “Tramway (Modern) of the Year” category has very much been dominated by Manchester Metrolink over the years and that is where it went again this year with 3073 receiving 73.33% of the votes (a total of 297 voting for it) beating West Midlands Metro 36 into second place. 3073 had run the first public service on the new Trafford Park line in March and that was enough for it to receive the most votes. Although Metrolink has dominated this category it is in fact the first time since 2016 that it has won outright with last year seeing a joint win.

Thank you to everyone who took the time to vote and congratulations to all the winners! There may be no prize, no lavish awards ceremony (virtual or otherwise!) but you can all go away with that warm glow that the readers of British Trams Online think you have done special in 2020! Tram of the Year should be back again at the end of November 2021 – hopefully there will be lots to be nominated then! 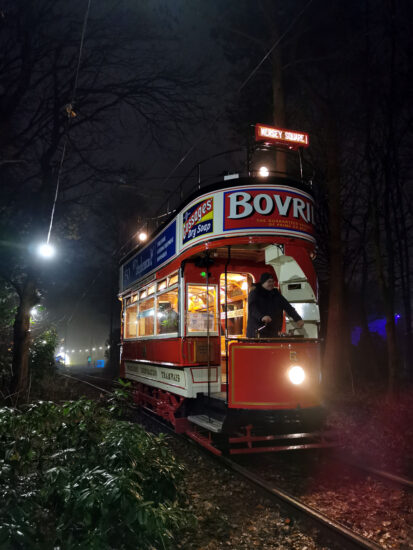 Your “Tram (Traditional) of the Year” for 2020 is Stockport 5! After returning to service for the first time since 2013 in December the tram won 296 votes. We see it here on 6th December just south of the Old Lakeside terminus during Lightopia. (Photograph by Joshua Haworth) 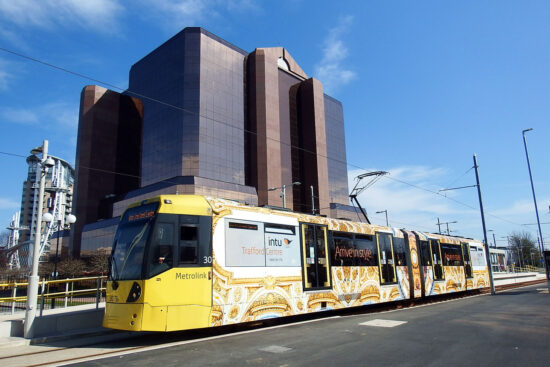 Receiving 297 votes (73.33% of the total) in the “Tram (Modern) of the Year” was Manchester Metrolink 3073. The tram received both a new advert and was the first tram to run in public service on the Trafford Park line. (Photograph by Steve Kemp) 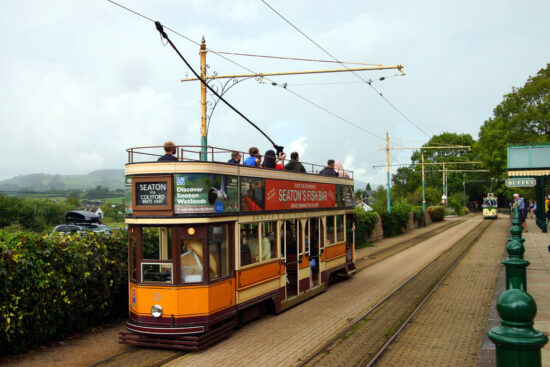 The Seaton Tramway won both the Tramway of the Year and Event of the Year. The Event is illustrated here with 10 and, in the distance 4, seen at Colyton on 28th August 2020. (Photograph by David Mee) 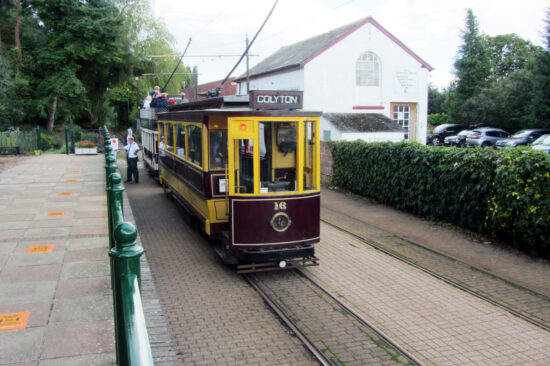