Posted on Wednesday 28 October 2020 by Gareth Prior

Its time to head back to London’s Docklands for another archive image of the DLR dating from 2003.

In this photo we see B90 25 and B92 74 just arriving at Lewisham on 4th November 2003. Up until the introduction of the B2007 trains all classes on the DLR were able to interwork together and so it was not unusual to see the various different types being paired together in service – at this time doubles were more common than the now expected triple units. The B90s were built in 1991-2 and were followed by the B92s between 1992 and 1995 – both constructed in Brugge by BN Construction. Whilst we can’t make out the livery on the rear unit the front train has the red doors as opposed to the later white. 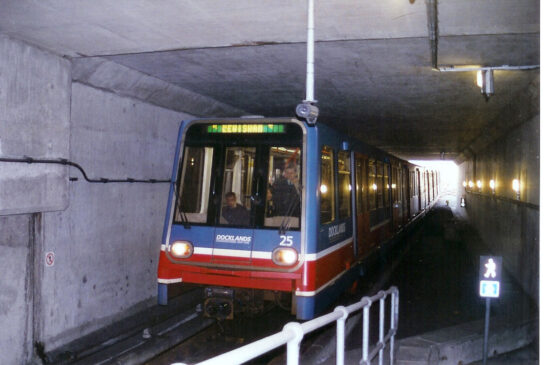