Posted on Tuesday 27 October 2020 by Gareth Prior

In this edition of “Still Standing!” we are again in London to take a look at an old tram depot which sis still used to house public transport vehicles.

Wandsworth Depot is in Jews Row and was originally opened by the South London Tramways Company on 6th May 1883 before the LCC took it over on 22nd November 1902.Horse trams were used there until 1906 before electric trams moved in until 30th September 1950. Trolleybuses were also housed here from 12th September 1937 until 1950 to serve route 612. After the trams and trolleybuses moved out it was converted for further use for buses. It is now the home of Original London Sightseeing Tour buses. 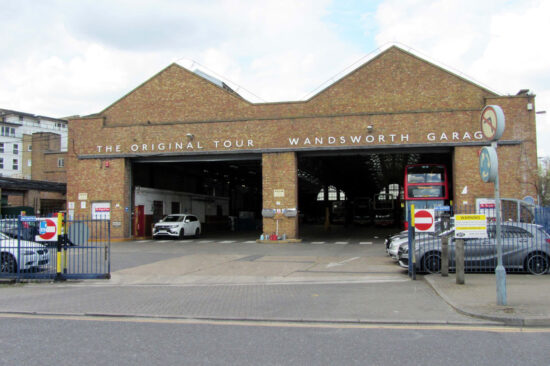 This view shows the front of the depot on 13th April 2016. It is thought the frontage was rebuilt in 1950 but the remainder of the structure is as was when trams used the building. (Photograph by Bob Hodges)