In Pictures: Good progress continues to be made on Trams to Newhaven project

Posted on Monday 26 October 2020 by Gareth Prior

2023 may seem a long way off but even though it will be the best part of three years before we can enjoy a ride by tram to Newhaven good progress continues to be made on the construction – no more so than around Ocean Terminal which was the first area handed back to the Infrastructure and Systems Contractor (SFN) and it is hoped that the first tracks for the extension may be laid here during November.

The latest update from the Trams to Newhaven project confirms that tram infrastructure works (as opposed to the all important utility diversion works) is now underway not only at Ocean Terminal but also at Newhaven. SFN have also been handed the section between Constitution Place and Baltic Street and from Queen Charlotte Street to Baltic Street (the latter of these will soon see the start of drainage and ducting works).

The project has also recently released a short video detailing progress made so far on the extension. This can be viewed at https://www.edinburgh.gov.uk/tramstonewhaven/news/article/67/our-progress-so-far-autumn-2020. 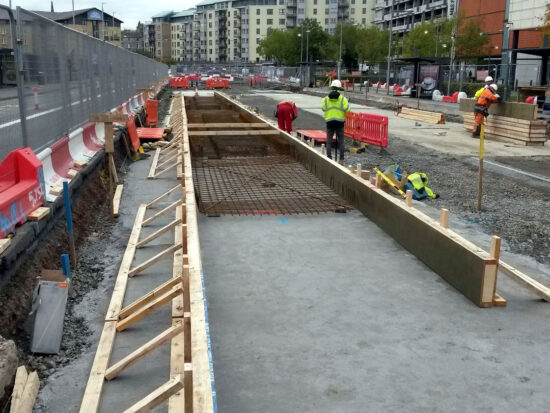 This is Ocean Terminal where the wooden shuttering and steel reinforcement is in place ready to cast the concrete track slab to which the track will then be attached. If all goes according to plan the track should start to go down here during November. 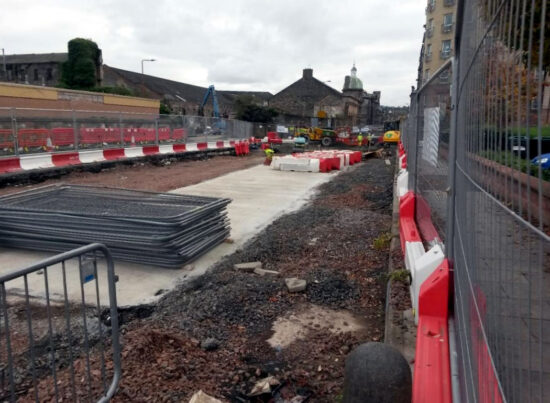 On Ocean Way (a continuation of Constitution Street) where the base screed is in place in preparation for the concrete track slab. (Both Photographs by John Hampton)