And then there were three…

There are now only three T68As available for service on Manchester Metrolink following the withdrawal of 2002. The tram last operated services between Piccadilly and Eccles during the evening of Wednesday 24 April after which it returned to Queen’s Road depot where it remains whilst the ATS and VRS equipment is removed for further use.

The withdrawal of 2002 means that there are now only three of the once six strong class of trams available for service following on from 2004 and 2006 being taken out of service earlier this month. Of the three remaining it is likely that 2003 and 2005 will be  withdrawn in the near future although 2001 may well survive a bit longer. This is because 2001 spent a long period of time out of service between 2005 and 2011 (the years not some extra members of the T68A fleet!) and as a result has fairly low mileage and is in a fairly good condition. For the time being the Eccles line remains the best place to catch one of the remaining T68As.

Meanwhile a further M5000 has now entered service with 3055 operating its first passenger journeys on the evening of Wednesday 24 April. It has joined the operational fleet at Queen’s Road depot. 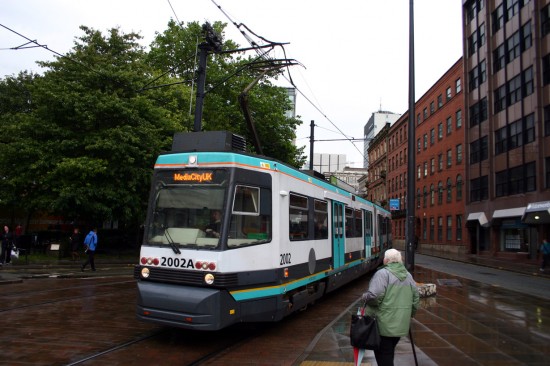 2002 approaches St Peter's Square on a wet 20th September 2012 when operating a MediaCityUK service. It has now been withdrawn from service. (Photo: Gareth Prior)

13 Responses to And then there were three…