Posted on Wednesday 14 October 2020 by Gareth Prior

You wait eight months for a new advert and then two arrive within a few days of each other! That is what has happened in Edinburgh as hot on the wheels of 255’s advert for Forever Edinburgh comes an advert for John Lewis on 272.

272 had been running in fleet livery since its previous advert for Audi was removed in July but it has returned to the ranks of trams with adverts after these new vinyls for John Lewis & Partners were added in October 2020. The usual style of advert is applied with sections three and five of the tram receiving full height adverts and the remainder of the tram just featuring ads above the windows.

The advert is teasing us that a new shopping experience is on the way at John Lewis Edinburgh with the full height panels featuring images of people looking expectantly at what may be coming! (Well, that’s our take on it anyway!) Various different colours are used on advert.

This is the fourth different advert to have been carried on 272 following on from one for CR Smith (August 2017-April 2019), the Royal Highland Show (April-July 2019) and Audi (July 2019-July 2020). There now remain eight trams in the fleet still in full fleet livery. 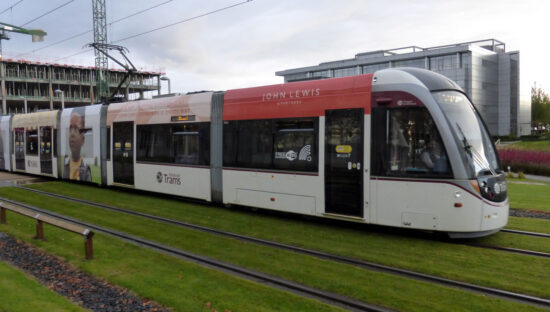 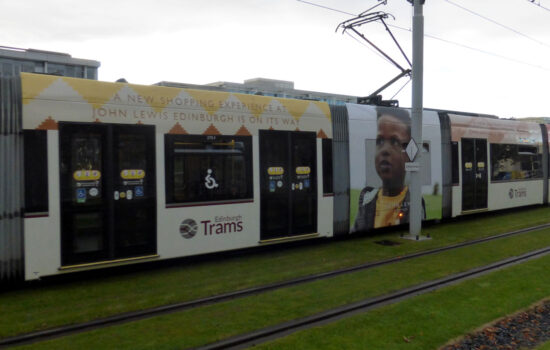 Another look at 272 as it pulls away for Edinburgh Park Central on its way to Airport. (Both Photographs by John Hampton, 12th October 2020)