Posted on Tuesday 23 April 2013 by Gareth Prior

The Cambridge Horse Tram at the Ipswich Transport Museum in Suffolk is set to be restored following the award of £49,000 from the Heritage Lottery Fund. The Museum found out the good news on 16th April and will now be able to proceed with the restoration of the tram over the next five years which will be able to be seen by visitors throughout the work.

As previously reported on British Trams Online the tram was numbered 7 in the Cambridge fleet but during initial work on the tram it was discovered that it had operated in Bradford for a short period of time before heading south. 7 was used in Cambridge between 1894 and 1914 and it is believed to have originally been constructed in the 1880s. Following withdrawal from service it was used as a workshop extension to a bungalow before being rescued for preservation. It is believed that this is the last surviving East Anglian horse tram.

Once the restoration is complete visitors to the Ipswich Transport Museum will be able to experience public transport from the horse tram era, through the times of electric trams and trolleybuses to the motor buses of today. It will join Ipswich tramcar 33 at the Museum, with the restoration of that vehicle having recently been completed.

Speaking about the award Chairman of the Ipswich Transport Museum, Tony King, said: “We are delighted to have received the support of the Heritage Lottery Fund, and are confident that this restoration will enhance the visitor experience at the Museum.”

The Ipswich Transport Museum is situated in the Old Trolleybus Depot on Cobham Road and is open Sundays and Bank Holidays between 1100 and 1600 and on selected weekdays between 1300 and 1600. Full details on the Museum can be found at http://www.ipswichtransportmuseum.co.uk. 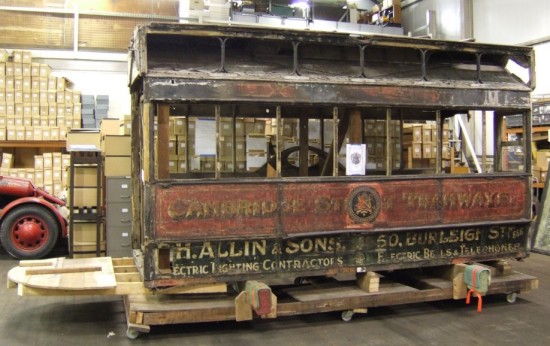