One final shot from the Glasgow Garden Festival as we feature another tram which was back on home territory – Paisley 68.

One thing you may have noted in the four trams we have featured over the past few weeks is that the Blackpool Boat Car is the only one currently operational – and that is in the United States of America! Of the other three, Paisley 68 has operated the most since returning from Glasgow – and has also been repainted and resumed its identity as Glasgow 1068 – although this too is now sidelined at Crich requiring an overhaul before it can return to service. But back to 1988 and Paisley 68 was sent up to Glasgow for use at the Garden Festival and even became a poster star being used in publicity by the Scottish Tourist Board! After returning south to Crich it was a regular performer as 68 up until 2009 before being withdrawn from use. A repaint into Glasgow colours as 1068 followed soon after but the tram is now out of use once more.

This view shows 68 sitting and waiting for its next use in June 1988 complete with extensive advertising between decks. 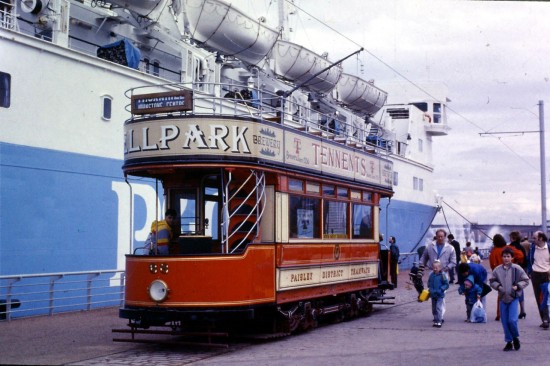