Posted on Sunday 7 June 2020 by Gareth Prior

We are heading back 12 years to 2008 for our latest look at a tram and other vehicles – and what a line-up we have for this time around!

This was July 2008 on a pleasant day in the Derbyshire countryside with a selection of Mike Sutcliffe’s excellent collection of early Leyland buses visiting allowing for some stunning shots of trams alongside this buses to be taken. This image is taken at the Entrance where we see Sheffield 74 heading north with a service up the line. The condition we see 74 in here is its 1909 condition having originally been built nine years earlier. The tram is the oldest vehicle we see in this shot – but only just!

Closest to the tram is a Central X2 bus, which would have run in central London as seen from is destination boards both on the front and side of the vehicle. This was celebrating its centenary in 2008 and was the oldest surviving motor bus built in Britain. The middle bus is a 1913 built bus which entered service in Wellingborough (having originally been ordered for use in London but after the bus company who had ordered it was taken over by the London General Omnibus Company it was diverted to Wellingborough). And on the far side we see 1921 Dodson 32 seat Convertible “Charabus” which spent eight years in service for the United Omnibus Co. All three high quality restorations were undertaken by Mike Sutcliffe and allow for stunning images such as this. 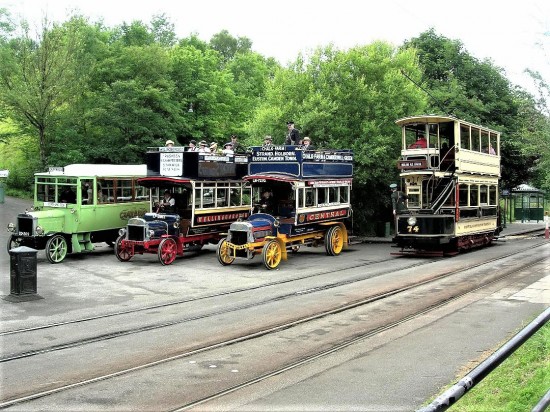