Posted on Wednesday 3 June 2020 by Gareth Prior

We stay in 1992 for this latest edition of “Picture in Time” as it’s the first day of trams across Manchester City Centre on 27th April.

As mentioned in the introduction 27th April 1992 was the day that the first modern trams ran in service on a UK street with the opening of the cross-city line (a line we’ve come to know as the First City Crossing in more recent times). This ran between Victoria – where trams had been terminating from Bury since 6th April – and G-Mex (with this stop having been renamed Deansgate-Castlefield since) including stops at High Street, Market Street, Mosley Street and St Peter’s Square. Of these new stops all have either been rebuilt or removed in the intervening years.

In this photo we see 1017 on that first day just climbing up towards where Shudehill stop would eventually be built. 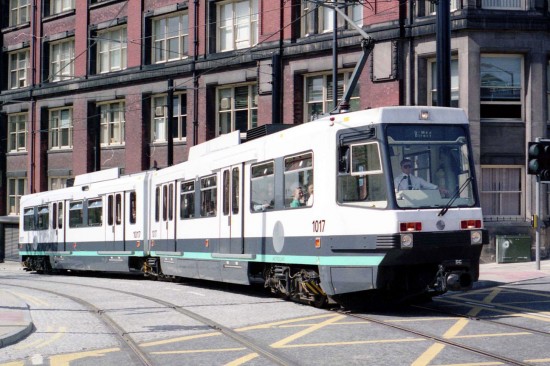 One Response to Picture in Time: Manchester Metrolink 1017