In Pictures: A look at Picardy Place, Edinburgh

Posted on Saturday 4 April 2020 by Gareth Prior

When the Edinburgh Trams extension to Newhaven opens in 2023 there will be a new tramstop constructed at Picardy Place which will replace the current terminus at York Place. There have been works in Leith Street and Picardy Place for two years already as part of a redesign of the road layout and these will now be extended to include the tram construction works.

Both Leith Street and the Picardy Place roundabout are being redesigned and there is also a lot of utility diversion works ongoing to support the project at the new St James Quarter redevelopment. The work here was due to be finished by the Spring but as tram works aren’t due to take place until Spring 2021 to Spring 2022 it may be that the finished product isn’t seen until at least two years time. Obviously, with the current situation and no works taking place it may be even longer than that! 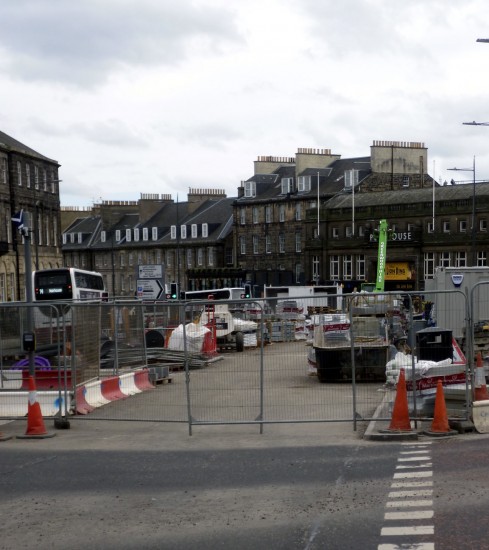 This photo is looking roughly eastwards and is across the roundabout (which is actually more triangular so does that make it a triangleabout?!) and this space is due to be the site of the new tramstop (roughly where the skip is). The number 14 bus on the left is about to turn left to go down Leith Walk (a move which will be prohibited from the end of March when diversions are put in place). You can also see The Playhouse theatre (the building with the flagpoles) which opened in 1929 as a 3000 seat cinema; like all similar locations across the country this is currently closed until further notice due to the Coronavirus restrictions. (Photograph by Roy Calderwood, 21st March 2020)