Posted on Thursday 13 February 2020 by Gareth Prior

After last week’s mystery – thanks to everyone who solved the conundrum of exactly the trams were in the photos! – we are on firmer ground regards the tram for this week’s archive Blackpool tram image!

Taken in September 1998 in the photo below we see Balloon 702 operating a service to Fleetwood at Gynn Square. So far, so normal, except for the fact that it is using the crossover at the Gynn switching from the wrong line to the usual northbound line. What isn’t known is whether the tram had just terminated from the north and was returning to Fleetwood or whether it had run wrong line all the way from North Pier. With it being September, presumably there wasn’t any major trackworks taking place but if it this was the reason for the unusual move it may have been emergency works.

702 is in the 1990s style of green and cream fleet livery with dayglo capital letter destination blinds, seen on the majority of trams at this point in time. The tram would carry on in service until 2009 when withdrawal came after one final use as part of the Farewell to Fleetwood tour which didn’t return to Rigby Road until 0300! Now part of the collection at the Heaton Park Tramway the tram is stored there having also spent some time on display at the Museum of Museums and in storage at the East Lancashire Railway. 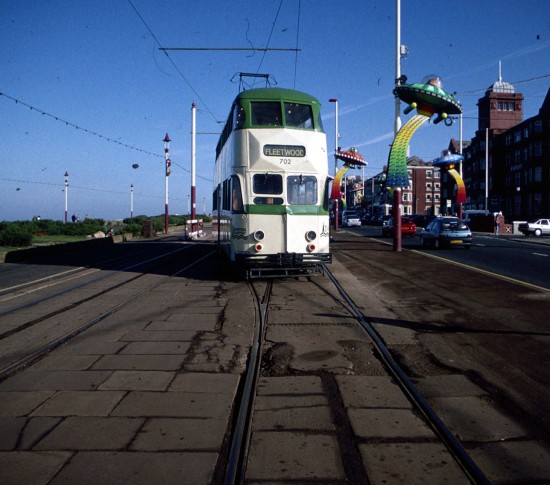