After all that waiting for an official announcement of when trams would start running beyond Grand Central to Library on the Birmingham Westside extension in the end it just kind of happened! With no pre-fanfare or public announcement Rudolph (36) led the way onto the extension (rather apt that he would considering he will play a key role for Santa in a couple of weeks doing exactly the same!) shortly after 1100 on Wednesday 11th December thus becoming the first tram to run in public service on the line.

It has been rumoured over the previous day or so that services would be commencing on 11th December but the expected start at the start of the day didn’t transpire, mainly because of an overhead problem at Bradley Lane. Yes, in a rather ironic twist on the day that the first section of modern tram line built without overhead started to be used in public service the other end of the line had a problem with its own overhead leading to trams unable to run! Initially reported late on Tuesday 10th December the wires had come down close to Bradley Lane which meant that it was not possible for any trams to run between Wednesbury Parkway and Wolverhampton St George’s. At the time of writing this disruption remained in place with repairs to the overhead still needing to be completed. To add to the day’s confusion all the social media updates of West Midlands Metro were saying for a long-time that trams were only running from Wednesbury Parkway to Grand Central, even when the extension was opened!

Back to the more exciting news and the opening of the extension, 36 became the first tram to run beyond Grand Central to Town Hall and Library in public service (its not known if there was a special announcement on board to let everyone know when they got to Grand Central the bit of history they were about to be part of!). 36 had also been the first tram to Grand Central. It arrived at the intermediate stop at Town Hall at 1121 continuing with its journey to Library. The next two trams to run into service on the extension were 17 and 29 with all trams following this continuing onto the extension.

Of course, the extension has been built without overhead wires – the first section of modern UK tramway to be built this way – and trams now lower their pantographs at Grand Central before continuing on their way. The line heads up Pinfold Street into Victoria Square where the first new stop can be found at Town Hall. Its then onwards towards Centenary Square and the temporary terminus at Library. This is just the first phase of the Westside extension with the remaining section onto Hagley Road, Edgbaston already under construction with the current timeline expecting this to open in 2021.

With all trams now due to run to Library it does mean that the two remaining non-battery fitted trams – 26 and 27 – are rather confined to barracks unless they run shortened journeys. Whilst on the tram front the two latest battery fitted trams did enter service on Wednesday 11th December, these are 25 and 32 which bring the total number of trams to have been fitted and run in service up to 19 (of 21), with 17 needed for the full weekday timetable this should just be achievable on a daily basis, subject to maintenance needs.

The new West Midlands Metro timetable should see trams running up to every 6 minutes (at peak times) and every 6-8 minutes at other times during the week. Saturdays is every 8 minutes and Sundays every 10 minutes. The end to end journey time will be 45 minutes. This is what should happen in practice but as a result of the overhead issues the frequency was revised on day one with trams running initially every 10 minutes and later every 8 minutes.

Laura Shoaf, Managing Director of Transport for West Midlands, said: “This tram extension is open in time for Christmas, but will serve the West Midlands for years to come. We said it would be open by the end of 2019, and here it is ready to go with three weeks to spare. We are offering people a convenient, fast and reliable service direct to some of Birmingham’s premier visitor attractions as well as the key office developments springing up around Centenary Square. Our network is expanding rapidly with further extensions in development, and combined with our investment in rail, bus, roads and cycling, is transforming transport in the West Midlands.”

Alejandro Moreno, Director of the Midland Metro Alliance, said: “It is incredibly exciting to witness trams in operation on the route we have been busy building since summer 2017. There have been more than 300 men and women working across the alliance’s projects in the West Midlands since we were formed and I’d like to recognise each and every one for their hard work and at the same time we would like to thank those who have been impacted by our construction for their patience and understanding.”

Phil Edwards, Assistant Director for Transport and Connectivity at Birmingham City Council, added: “This Metro extension will increase the city’s public transport offering, helping to better connect people to other areas of the region and making it easier for those living, working and travelling in the area to get around. The launch of services to these two new stops is an important milestone in this scheme, enabling people to travel by tram to the Library of Birmingham and other destinations in the Centenary Square area.”

You will notice in the quotes above – and in the TfWM press release – they are keen to point out that the extension has opened “early” as they said by the end of 2019 and have achieved that. The chances of it ever opening on 31st December seem pretty remote so it would probably be fair to say it has more or less opened on schedule rather than a big fanfare of how great it is to open early!

Despite that it is great to see the extension now open for public service as the West Midlands Metro continues to grow! Next up Wolverhampton Railway Station!

* We hope to bring you a gallery of photos soon on British Trams Online. If you have any photos of testing or the start of services you would like to share with us please email gareth@britishtramsonline.co.uk. 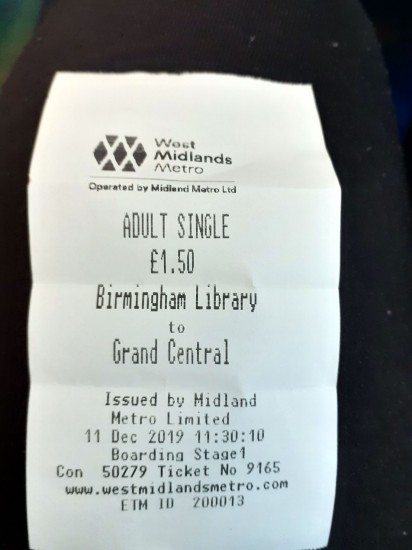 This is the very first ticket sold on the extension. £1.50 for an adult single between Birmingham Library and Grand Central. (Photograph by Andy Walters)