Posted on Thursday 14 November 2019 by Gareth Prior

Jasper Carrot, the comedy legend who comes from and still lives in Birmingham, has become the latest recipient to have his name adorned on a West Midlands Metro tram after a special ceremony held on Wednesday 13th November at the Town Hall stop on the new Westside extension. 28 was the tram chosen for its honour and not only did it receive the name it also became the first tram to run on the extension with passengers on board with the VIP naming party arriving at the ceremony on board the tram.

Speaking about the naming Jasper himself said: “Having a tram named after you is indeed an honour especially when it is all tied up with Birmingham and the West Midlands where I was born and bred. Today was pretty special. The last time I rode on a tram in Birmingham was over 70 years ago when I went from the city centre to Handsworth Wood, it took about four days. To ride on the super smooth flying machine was a real treat especially as I didn’t have to pay.”

After the ceremony to name the tram Jasper went on a walkabout before media duties. 28 then returned to Grand Central and the depot empty. Whilst it was also VIPs who were part of the naming ceremony who enjoyed a ride on the tram as it made its way onto the extension they did become the very first non-Metro staff to be carried onto Westside ahead of its opening next month.

Laura Shoaf, Managing Director of Transport for West Midlands, commented: “With his entertainment career spanning 50 years Jasper Carrott has been a champion for Birmingham and a great ambassador for the West Midlands and is fully deserving of this honour. In a few weeks his tram will be taking passengers to Centenary Square to enjoy the big wheel and ice rink and in a few years we are planning to run another line to the NEC and Airport, which would carry the Jasper Carrott tram to his beloved Birmingham City FC.”

The name on 28 is a simple vinyl affair located under the side cab windows and it has become the third Urbos3 to currently carry a name with 31 named Cyrille Regis MBE and 37 Ozzy Osbourne. 35 was also named Angus Adams (in a ceremony carried out by HM the Queen) but when it received the WMM blue this name was lost and hasn’t been reapplied. 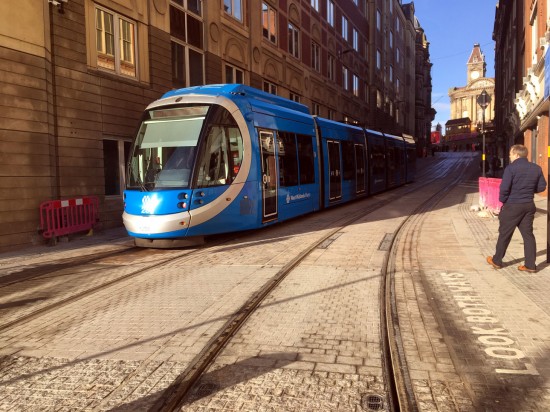 28 heads up Pinfold Street on its way to the ceremony. The name is covered here. (Photograph by Kevin Heath) 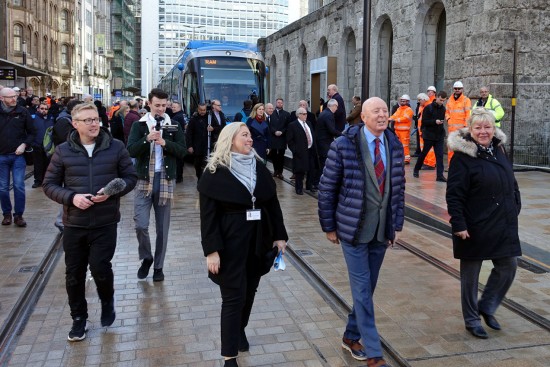 Jasper Carrot (centre) goes on a walkabout after the naming. 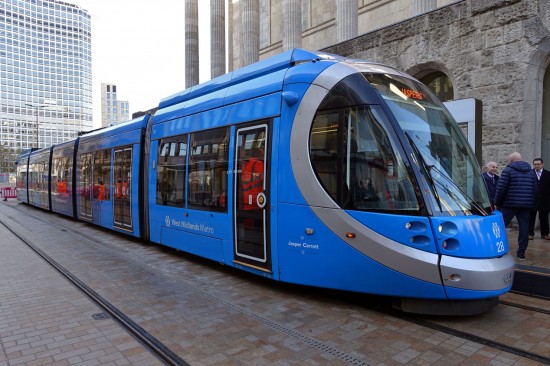 Standing at the new Town Hall stop we see 28 with name now revealed. 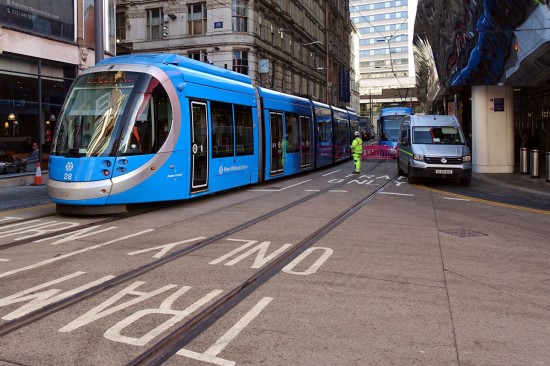 28 arrives back at Grand Centre on its way back to the depot. (Photographs x3 by Ian Nightingale)