A look at the trams at the London Transport Museum store, Acton

The London Transport Museum Depot at Acton opens three times a year to the general public – with full facilities available on site on these special days – as well as being open for smaller private group visits by special arrangement. It is widely known that this ‘overspill’ collection, covering all modes of transport in the capital, complements the main London Transport Museum in Covent Garden, where space is very much at a premium. There, the public can see a restored green horse tram (London Tramways Company No.284) and also a four-wheel open balcony West Ham Corporation tram, No.102. This car was not typical of the London electric tram fleet in general, as viewed from the perspective of the fleet during the run-down of tramways, from the mid /late-1930s to the end of the system in July 1952. In this report Dr Robert Blackburn takes a look at those trams held at the Acton store.

Acton houses an ex-LCC E1 type car of 1908, no.1025, in its later guise with enclosed platforms, together with a 1931 Feltham car, once No. 355 in the fleet of the Metropolitan Electric Tramways (MET). It is displayed in this original form. After the great merging of all the transport undertakings in 1933, this car became No.2099 in the fleet of the London Passenger Transport Board ( LPTB). The West Ham car at Covent Garden became No. 290 in the same fleet. It has to be said that London Transport later showed great historical foresight in setting aside both 1025 and 290, together with a single deck works car (022) which was much later restored as LCC open top four-wheel car 106 (now a popular running exhibit at Crich) by the LCC Tramways Trust. This was at a time when the movement to preserve tramway relics was still in its infancy, and apparently beyond the understanding of many , even most municipal systems in the 1940s and 1950s.

We all know that tramcars are awkward vehicles to display, even in static museums such as Acton. 1025 and 355 are placed very close together in a corner of the depot, next to the ‘Diddler’ trolleybus No.1 of 1931, and a typical later trolleybus, No. 1768. It makes external photography very difficult. Fortunately, I was allowed brief access to both cars on 28th September 2019, and was able to photograph both upper and lower decks of each car. 355, as LPTB (later LTE) 2099, was the first Feltham to be sent up to Leeds for trial in 1949. Following that, Leeds City Transport bought the entire surviving fleet of Felthams, both ex-MET and ex -LUT. The car bodies had been built in 1931 by the Union Construction Company (UCC) of Feltham, Middlesex. 54 of them, with British Thomson Houston equipment , went to the MET, and 46, with GEC equipment, went to the LUT.

In due course, 2099 became Leeds 501, and the others followed with numbers in the 500 series. 2099 actually ran for quite some time in Leeds with its old London number. At the end of the Leeds system in November 1959, 501 was earmarked for preservation by a group of ninety private sponsors. It might have gone to Crich, then right at the beginning of its development, but the sponsors preferred the British Transport Commission Collection at Clapham . Another Feltham, 526, went to the Seashore Trolley Museum, Maine, USA, where it has been steadily disintegrating over the years, sad to say. The experimental centre -entrance Feltham MET 331, (LPTB 2168) became Sunderland 100, and is, of course preserved as a running exhibit at Crich after eventual restoration, sponsored by British Steel. The bogies from another Feltham, 517, in due course found their way to London Transport E1 1622, another big preservation project, completed in 1999, thanks again to the LCC Tramways Trust.

It is most unlikely that either 1025 or 355 will ever run again under their own power. But they are very popular exhibits at Acton, even though the public are not allowed to clamber all over them, unlike West Ham 102 at Covent Garden. Though never wildly popular with Leeds City Transport staff in the 1950s, these fine cars, with the ‘Horsfield’ single-truck cars (see 180 at Crich) formed the mainstay of the fleet in the declining years of the system, right to the end. Leeds also acquired London Transport (ex-LCC) No. 1 by chance, because of an accident to another Feltham. It became Leeds 301, was later kept at Clapham by the BTC after withdrawal in 1957, and ended up at Crich when the BTC collection was dispersed. This unique car is about to re-emerge, transformed, as ‘Bluebird,’ in 2020, after comprehensive restoration. 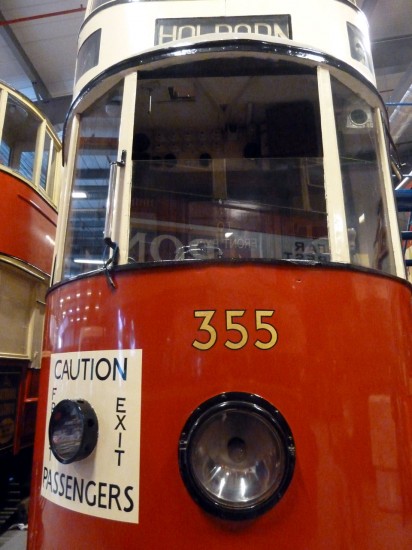 As mentioned in the text photography is difficult at Acton with vehicles tightly packed. In this view we see the front of 355 with part of 1025 also just visible to the left. 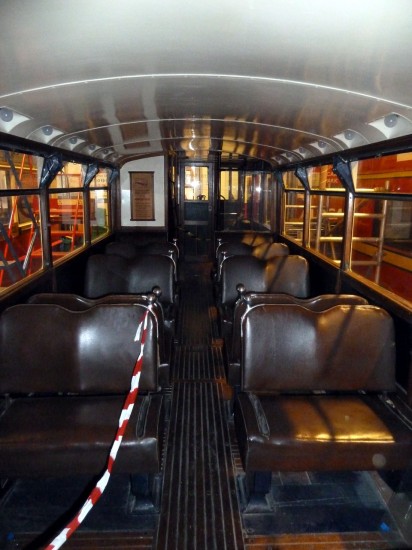 The lower deck interior of 355. (Both Photographs by Robert Blackburn)

* More photos from this visit to the London Transport Museum Store in Acton can be viewed in Gallery 833.

This entry was posted in London Transport Museum. Bookmark the permalink.

1 Response to A look at the trams at the London Transport Museum store, Acton