Posted on Thursday 28 February 2013 by Gareth Prior

Manchester Metrolink has opened its latest extension with the line between Shaw & Crompton and Rochdale carrying its first passengers on Thursday 28th February. M5000 3016 had the honour of forming the first service departing Trafford Bar before 0500 on a dark and chilly morning.

Services run to Rochdale from St Werburgh’s Road on the South Manchester Line at a frequency of every 12 minutes with M5000s exclusively used as T68/T68As are not allowed to run on the Oldham and Rochdale Line. Five new stops have now joined the Metrolink network at Newhey, Milnrow, Kingsway, Newbold and Rochdale Railway Station. The line will be further extended into Oldham and Rochdale town centres from 2014 which will see the current line through Oldham Mumps closed and replaced with a loop line calling at four new stops.

Cllr Colin Lambert, Leader of Rochdale Borough Council, said: “The arrival of the Metrolink at Rochdale Railway Station marks a significant point in the development of this exciting project. The launch of services from Rochdale Railway Station benefits residents and businesses in the area and presents a major boost to the local economy, as well as making our borough more accessible to visitors, investors and developers. A great deal of hard work has already gone into project and I am grateful to the community for their patience during the unavoidable disruption. The good news is that the extension of the line
continues at a pace and it won’t be long before we can all enjoy the benefits it will bring once it arrives in the heart of our new town centre next year.”

Unfortunately the day did not go without incident as a points failure at Newton Heath & Moston in the evening saw services suspended between Victoria and Rochdale. The service was suspended for nearly an hour and a half before trams resumed through to Rochdale shortly before 2000.

The official line from Transport for Greater Manchester remains that the next extension to
open will on the South Manchester Line from St Werburgh’s Road to East Didsbury in summer 2013 although some rumours are suggesting that this could be as early as April. This line will be unable to open until the control room, currently located at Queens Road Depot, is moved to the new Trafford Depot. This will be followed by lines to Ashton (winter 2013/4), the aforementioned Oldham and Rochdale town centre extensions (2014) and Manchester Airport via Wythenshawe (2016) along with the proposed Second City Centre Crossing which has yet to be approved. 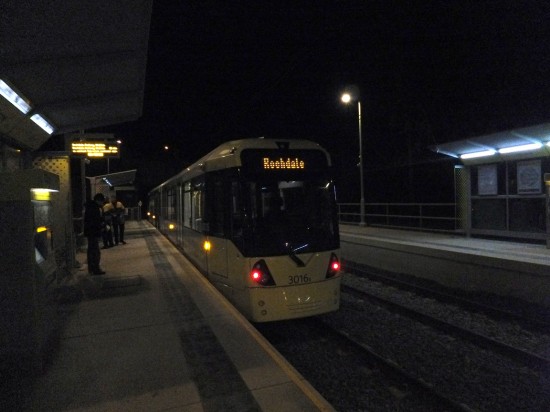 The first tram to Rochdale is seen at Milnrow in the hands of 3016. (Photo: Ken Walker)

18 Responses to Metrolink opens to Rochdale