Posted on Wednesday 25 September 2019 by Gareth Prior

With Blackpool Standard 143’s restoration now over and the tram officially launched back into service we take a look at the early days of the tram being in the ownership of the Lancastrian Transport Trust, now the Fylde Transport Trust – and it would be fair to say the tram has come a long way since then!

Built in Blackpool Corporation Transport’s own workshops, Standard Car 143 entered service in the April of 1924 as an open balcony, open vestibule covered tram. It was to receive windscreens in December 1929 before it was fully enclosed in February 1932. Remaining in service until October 1957 the tram was then withdrawn but this was not to the end for 143 as it was chosen for conversion into a Works Car. Unveiled as Works Car 3 in July 1958 it was used as an overhead line car for over 30 years (being renumbered as 753 in 1972) until suffering a fire in June 1990 after which is didn’t turn another wheel in active service. It did, however, remain stored at Rigby Road Depot before the Lancastrian Transport Trust came on the scene acquiring the tram in 2002.

Staying at Rigby Road until April 2003 the LTT then moved it off site and it is in 2004 that we see the tram below. Restoration had not started at this time with a plan – and funding – for this work still being formulated with the tram stored in its as withdrawn condition. The 1990 fire damage can clearly be seen in these photos.

In today’s special Picture in Time we take a trip back to before the start of restoration in 2004. The tram had, by this time, been moved to Brinwell Road but was still waiting for the start of work to return it to its former glory. The fire damage from 1990 is clearly seen in the below photos. 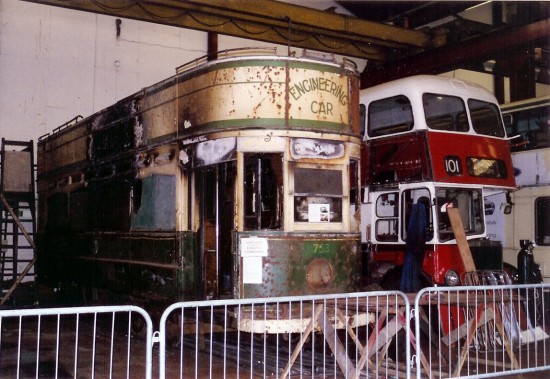 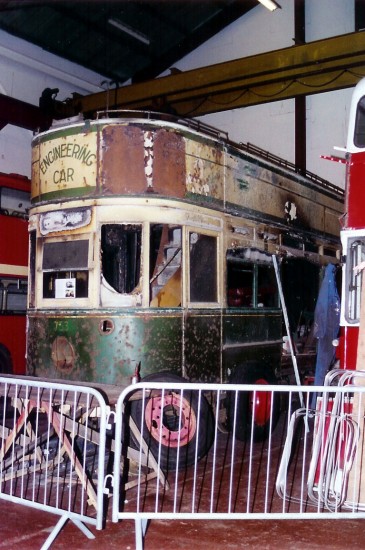