Posted on Saturday 21 September 2019 by Gareth Prior

We are off to London’s Docklands again for today’s image from the archives as we head back to 1994 for a photo taken in a different time for the Docklands Light Railway.

Taken on 14th October 1994 this photo shows unit 04 arriving at Limehouse with a service from Tower Gateway to Beckton. Whereas today all services are operated by either two of three units coupled together at this time it was sufficient for just one unit to run this service on its own just showing how far the network has come in the past 25 years. The station at Limehouse is also in its original configuration with small rounded canopies on each platform as seen on many original stations when the system originally opened. Today Limehouse is a very busy interchange station with lengthened platforms and more cover for passengers. To complete the scene we see a EMU on the line into London Fenchurch Street carrying Network SouthEast livery which isn’t too dissimilar to the DLR colour scheme! 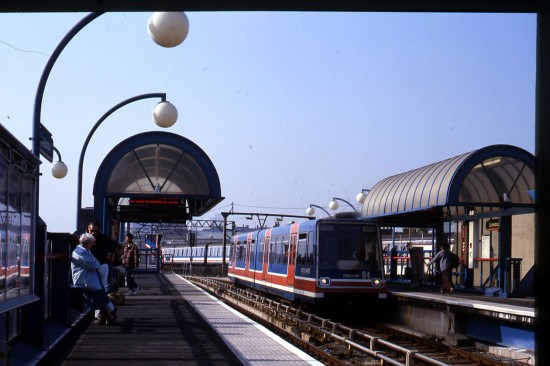