Adham breaks the record in Nottingham

Posted on Tuesday 19 February 2013 by Gareth Prior

As we reported last week urban transport enthusiast Adham Fisher, from Leicester, was attempting to break his own record for the length of time it took him to visit every stop on Nottingham Express Transit at the weekend – and he did it, taking around five minutes off his previous time.

In 2010 Adham had achieved a time of one hour and 26 seconds but his main attempt this time around – which took place on Saturday 16th February – saw him visit each and every stop in 55 minutes, 37 seconds (taking Highbury Vale as two stops) or 53 minutes, 50 second (when taking Highbury Vale as just one stop). Congratulations to Adham on his achievement in smashing his own record.

Adham also holds the record for visiting every stop on the Stagecoach Supertram system in Sheffield, something he achieved in July last year. He managed to do the complete system in one hour, 38 minutes, 47 seconds which took five minutes off the previous record. 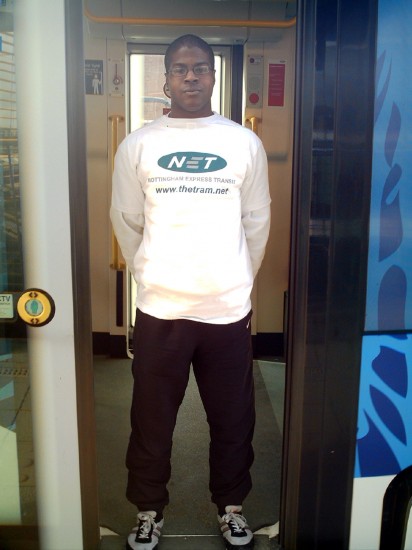 Adham Fisher is shown here on board the tram wearing the special tshirt he was presented by Nottingham Express Transit. (Photo courtesy of Adham Fisher)