Around the World in Trams: Amsterdam 662

Posted on Sunday 15 September 2019 by Gareth Prior

For the next few weeks it will be more a case of “odds and sods” for our worldwide tram picture series as we take a look at trams from various different systems, starting off with a historic image from Amsterdam.

The below image was taken in 1967 and at the time 662 was just three years old having been introduced into service in the June of 1964. A Werkspoor 5G tram it was operating on route 25 when captured on camera with a livery which can be best described as white and green. The tram is joined by an unidentified classmate and of particular note here is that 662 is carrying a postbox – a sight you won’t see today! As for the tram 662 was to survive for another 35 years before being scrapped in 2002. 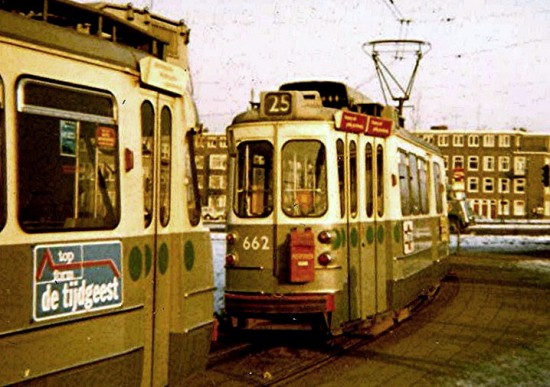