In Pictures: Boat 228 operating in San Francisco as 233 gets ready to join it

Posted on Monday 2 September 2019 by Gareth Prior

It may be a long way from home but 2019 has seen the return to full service of one of San Francisco’s two Boat Cars with it being regularly rostered to service on Tuesdays and Wednesdays throughout the summer (save for a short period out of use for motor repairs). The Boat being used for this service has been the longer-term resident of this part of America, 228, and as is always the case with a Boat Car – regardless of which side of the Atlantic it may be! – it has proven to be a very popular addition to the historic trolley service offered in San Francisco.

Since its repairs 228 has been running on Tuesdays and Wednesdays throughout August and will continue to do so for part of September. Its hours of operation have been between 1100 and 1700 with the tram running from the San Francisco Railway Museum and Fisherman’s Wharf.

During its period of out service receiving motor repairs the chance was also taken to replace the windscreens with a new temporary single version. In the long-term it is planned to put in two piece windscreens.

It has also been confirmed that it is planned that 228 will run during the annual Muni Heritage weekend on 7th and 8th September with the tram due to operate on Saturday 7th. On Sunday 8th September it is currently scheduled that fellow Boat Car, 233, will be running – a rare outing for this car and to this end it has recently been under test. Full details of what is planned during the Heritage weekend can be found on the Market Street Railway website. 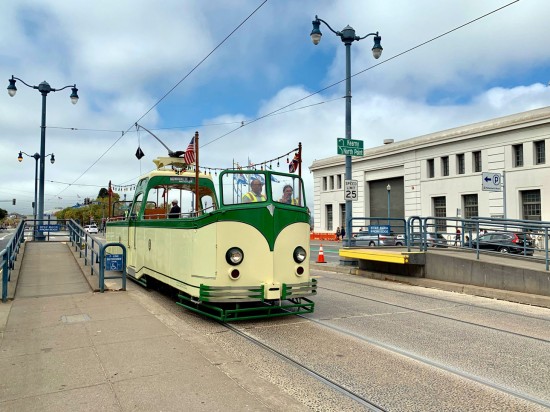 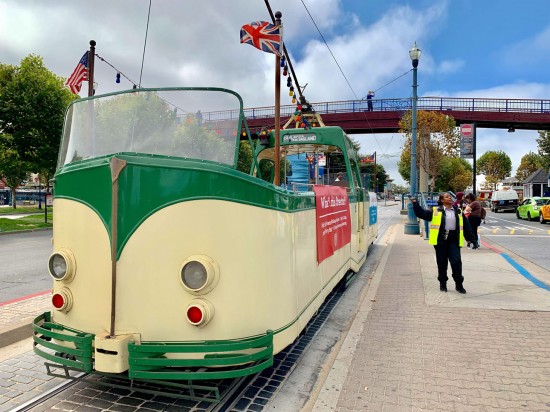 228 in action on 28th August. This image clearly shows the new single piece windscreen which was installed on the tram during its recent motor repairs. (Both Photographs by Kev Adlam)

This entry was posted in Around the World in Trams, Blackpool Tramway. Bookmark the permalink.

One Response to In Pictures: Boat 228 operating in San Francisco as 233 gets ready to join it