In Pictures: The Blue revolution continues on West Midlands Metro

There are now four all blue trams on the West Midlands Metro with 23 the latest of the Urbos3 trams to receive the new livery vinyls. A tram had been spotted in the depot shed at Wednesbury last week but at that time it wasn’t possible to identify which tram it was but on Saturday 27th July it became obvious when 23 was seen in service sporting the new look.

The livery is identical to that carried on 37 including the larger fleet numbers on the ends (the remainder of the tram is the same as all of those in blue with the exception of 31 of course which also includes the Cyrille Regis silhouette).

As with all blue liveried trams so far 23 is also one of the battery fitted versions and it is expected that this will remain the case. Currently none of the blue trams have received external advertising but West Midlands Metro do continue to advertise the chance to, well, advertise on a tram so it would appear to be only a matter of time before this does occur.

Monday 29th July saw all four blue liveried trams – 17, 23, 31 and 37 – along with 20th anniversary liveried 19 in service together for the first time. It is very much a case of catch the magenta and silver liveried trams whilst you can! 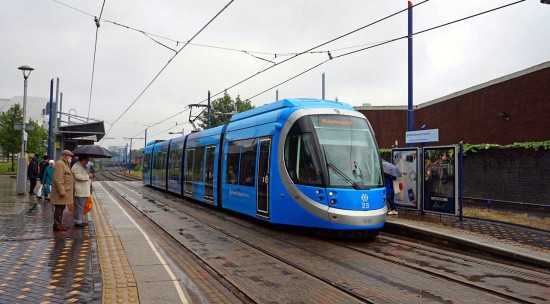 The first day in service for 23 in its new livery was a wet 27th July. The tram is seen here at West Bromwich Central as it heads to Wolverhampton St George’s. This stop also has the new brand in place now. (Photograph by Andy Walters) 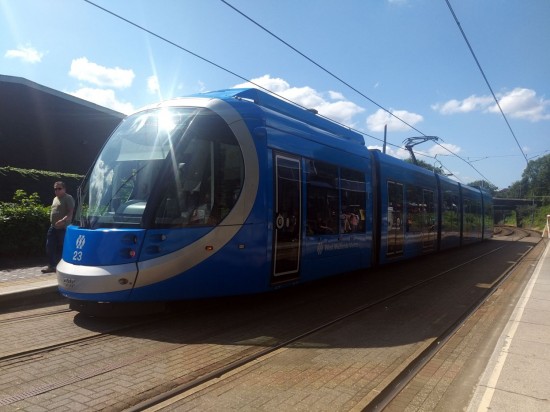 From wet weather to sunny skies! The Great British summer! Its 29th July and 23 and its blue livery. (Photograph by Mark Cufflin) 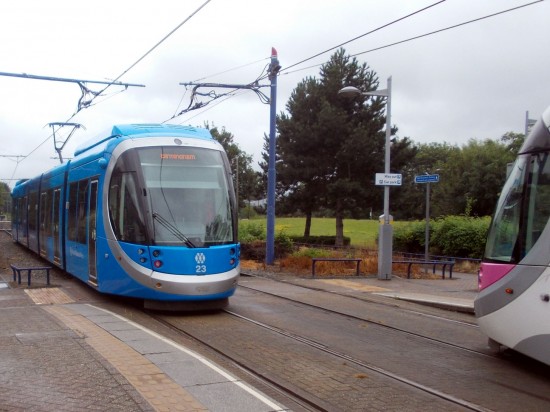 Another view of 23 as it arrives on Black Lake bound for Birmingham. (Photograph by Mike Averill)