We’re back in the late 1960s again for this week’s archive image from Blackpool and we feature a tram which just made it into the new millennium but not in the condition shown here.

This is Second Series English Electric Railcoach 615 which is seen at Fleetwood Ferry about to embark on a timetabled service all the way to Starr Gate (on route 1 as seen in the windscreen). A passenger is just boarding the tram but whether they chose to head all the way is open to debate. Again this photo was taken following the mass 1968 renumbering in either late that year or the following year, 1969.

615 would remain in service in this condition until January 1974 when it was withdrawn and a start made on its conversion to become an OMO car. This was duly completed in the May of 1975 with the tram re-entering service as OMO 11. It became the last OMO to run in normal service in March 1993 but its life didn’t end there as it became a test tram moving to Carnforth for a time before testing in Blackpool up until early 1997. Another withdrawal followed and it was then scrapped in September 2000. 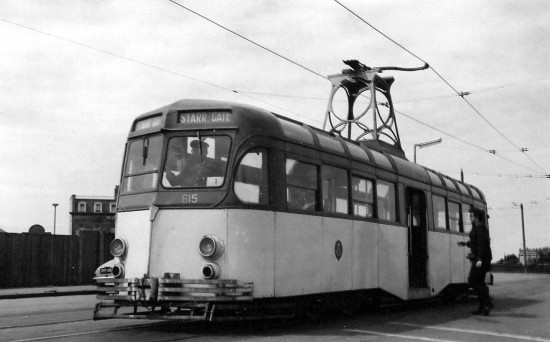