Another Crossbench set for return on the MER

Posted on Saturday 8 June 2019 by Gareth Prior

Whilst 2019 is looking like being the year of the returning trailer on the Manx Electric Railway (37, 49 and 54 all due to back in action in time for the Manx Heritage Transport Festival in July) looking further ahead and a long withdrawn Crossbench Car is now being prepared for a return within the next few years. In a project which has just got underway 1904 Crossbench 29 is the tram in a question – a tram which hasn’t run since 1979!

29 was one of four Crossbench Cars built for the Manx Electric Railway in 1904 by ERTCW in Preston and currently none of this batch of trams is currently serviceable. 29 is another long withdrawn tram which has been moved around the island in more recent times following its withdrawal in the August of 1979. It was originally stored at Laxey Car Sheds before being transported off MER metals to Homefield Bus Garage in 2002. It spent just over seven years there before in November 2009 it was back on the MER and has remained stored at Derby Castle Sheds since. Of note is that one of its last uses occurred in May 1979 during the Centenary of Electric Traction parade where it hauled Locomotive 23 through Laxey.

The exact timescale of when 29 may return to service hasn’t been announced yet but is expected to be within the next few years. This is all part of Isle of Man Transport’s aim to expand the number of open cars operational in the fleet with the continued increase in passenger numbers. Although when the car last ran it didn’t have air brake equipment it is planned that it will receive this during its overhaul.

The car is currently in the paint shop at Derby Castle where initial preliminary work is now underway. 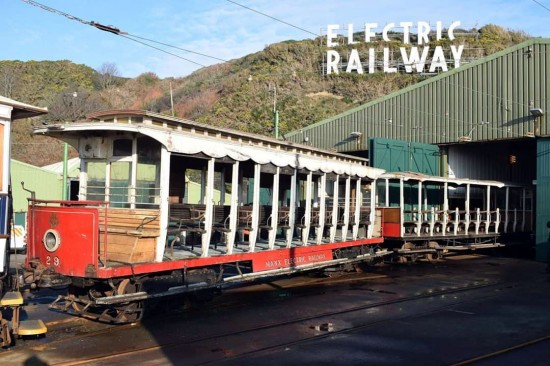 29 being shunted around Derby Castle Yard just before the preliminary checks took place ahead of work starting. 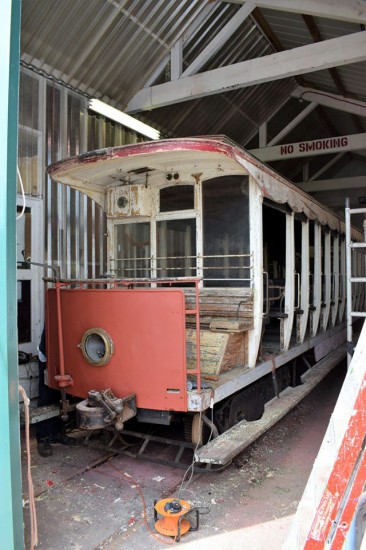 29 seen through the doors of the paint shop. (Both Photographs courtesy of Manx Electric Railway Online)