This week we are off to Beamish in 1977 for a view which not only includes a tram in service but also some redundant Glasgow Subway Cars which had been acquired for their electrical equipment.

Taken on 4th August 1977 this view is in front of the tram depot with the Glasgow Subway Cars occupying the position which is now being redeveloped for a new bus depot to be constructed. These Subway Cars were being replaced at this time in a major refurbishment of the Clockwork Orange (with these dating from the Victorian era) and six were sent to Beamish to allow the museum to use their electrical equipment for on the trams being restored at the time. The vehicles were then broken up.

In the background we can see Beamish 1 as it was then known in a fully open top condition. This tram is, of course, better known as Sheffield 264. Having arrived at Beamish in 1973 the tram had been converted into an open topper because of the condition of the upper deck and would remain in this condition until 1985. At this time it was in Gateshead colours. 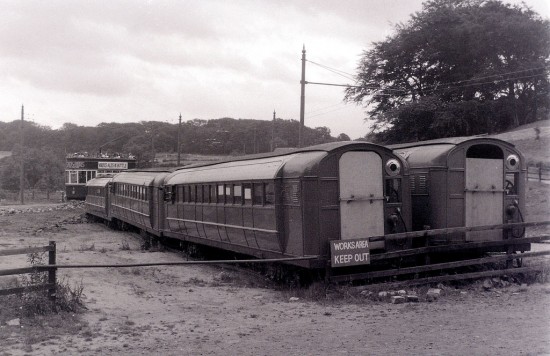